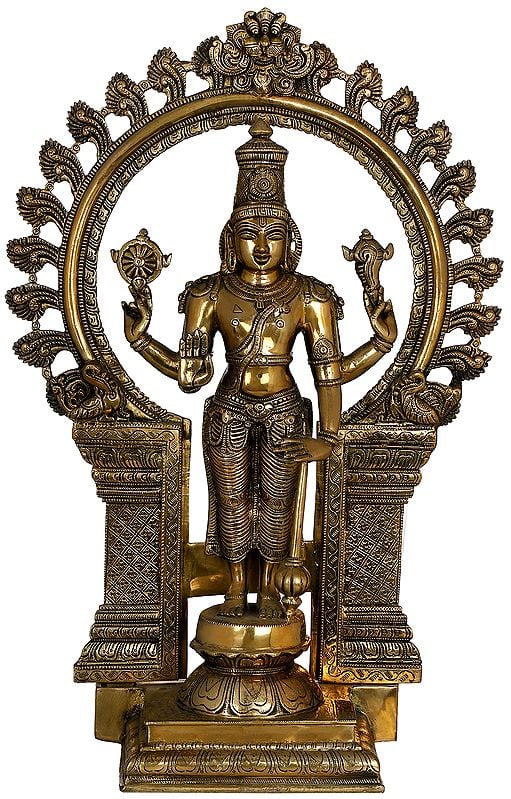 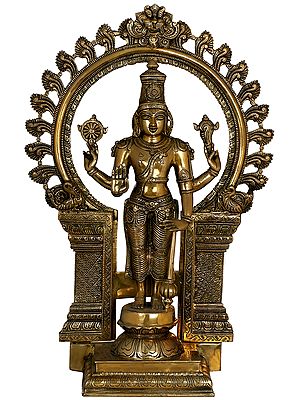 The sculptors contribute a lot of hardwork and time while sculpting a statue to make it upto a level of masterpiece, this statue shown here is an apt example of the same. Lord Vishnu stands in his elegant poise and sharp stance on an inverted lotus pedestal which is kept on a multi-layered rectangular base with smooth edges and flower petal carvings. The smoothness, glow, curves and intensity of carvings of this brass sculpture is one of a kind.

He is framed here in a four layered Kirtimukha ring surrounded by an elaborate border of flowers scored precisely, reflecting his innate nature of being the preserver of mankind; the second layer is the dominant one, carved in smooth and plain round texture in a contrasting color combination. This stylized arch is supported by two luxuriously carved pillars in multiple layers and varied patterns incised in meticulous forms; two beautiful peacocks sit on either of the two pillars facing Lord Vishnu.

Vishnu is one of the major deities of the Hindu pantheon who is revered for his act of protecting the humans and restoring the world in order. He stands here blessing the devotes of fearlessness and garbed in a high ankle dhoti scored in accurate parallel and horizontal lines along with a similar designed waistbelt; he carries his iconic attributes of a conch and chakra in the rear hands and a mace in the left anterior hand; ornamented in a charming jewellery on neck, hands and legs along with a sun haloed long crown with extremely detailed and clear carvings. His features and gestures are modelled in a realistic manner and a Vaishnava tilak that glorifies on his forehead.