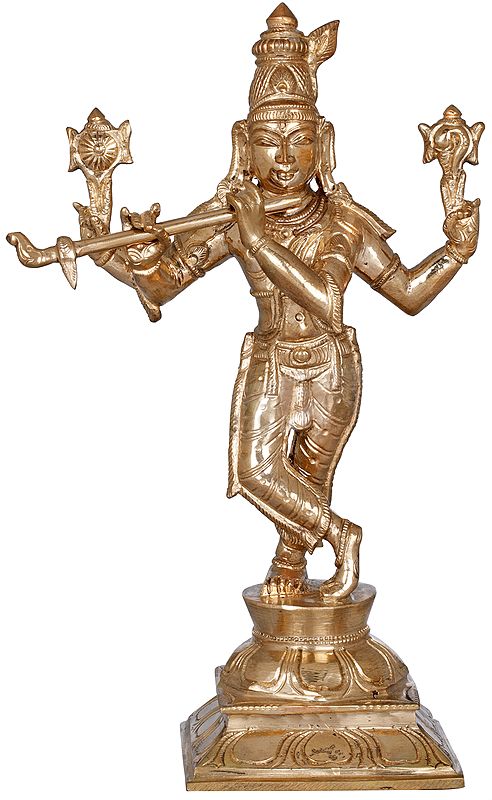 Krishna is the all attractive and sweet darling of Vrindavan. He loves to take out his pets for grazing. That's why he is called 'Gopal'. The holy cow has given him the name of 'Govinda' which means he is the master of the senses. So, here the dear of Gau Mata and Prince of Vraja is showing us his majestic four handed form in which , he is standing on a lotus pedestal, wears a pitambara dhoti, adorns a crown along with jewels all over the transcendental body and playing flute from his lower right and left hands. While he holds the sacred and divine conch and disc in the upper two hands. This composition is a combination of Krishna's sweet and youthful expressions along with his superiority as the Supreme Personality of Godhead.

Krishna has been depicted very gorgeous and elegant. Here we can have a view of the alluring and brilliantly carved lotus pedestal on which the lord is postured. His adorable crown with an attached peacock feather, elaborates the depiction as an ‘Aishwarya Pradhan' (Cosmic form of the Divine) rather than Madhurya form (Cowherd form). The flute's end has an elephant face carved on it. The long and artistically crafted earings add a spark to the sculpture.