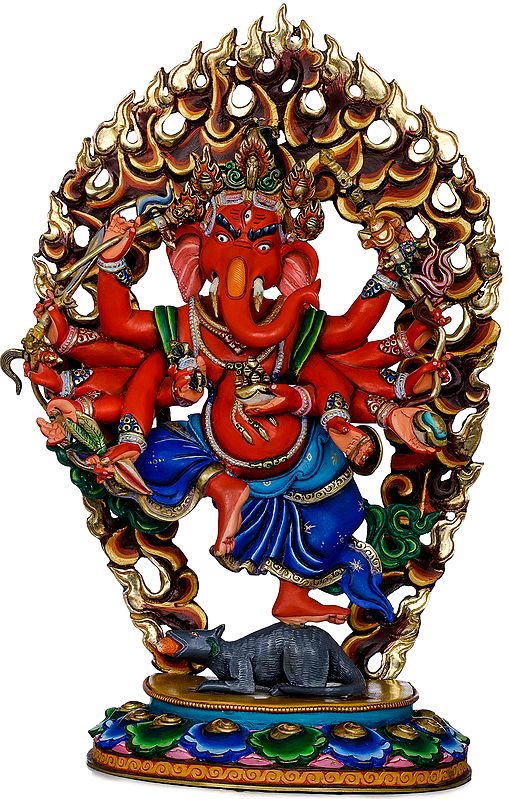 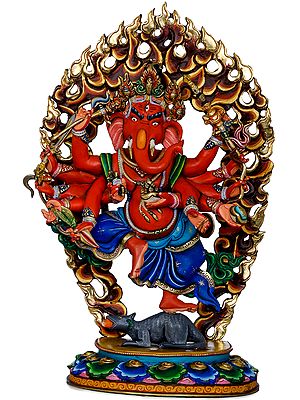 $1595.00
In Nepalese sculptural tradition, characterised by a predominance of works of art made in the service of devotional life, there is no demarcation between Buddhist or Hindu influences. The Lord Ganesha sculpture that you see on this page has the distinctive physiognomy that Nepalese artisans have developed over generations. The composure of countenance is several notches upwards in terms of expressiveness. A dynamic, almost fluid stance. A distinctive iconography found rarely in those very Indian traditions - say, Gupta or Pala art - which the artisans of Nepal draw from.

The son of Shiva is in the midst of the Shaivite Tandava. His twelve arms - He is the dadashabhujadhari Ganesha - are flaying by His side, each bearing a weapon, just like the iconography of His Durgaroopa Mother. One of His feet has come down on the back of His trusty vahana, the mouse. The silhouette quivers with motion, almost as if any minute now one foot is going to take off mid-air and the other is going to come down on the head of the mouse.

The colour palette is distinctly Nepalese: deep blue dhoti the colour of the Himalayan skies and vibrant green angavastram, contrast sharply with the rich red of the Lord’s complexion. The detailed carving on the crown of five spires, the intricately chiselled aureole, and the multi-lotus pedestal are hallmarks of the finest Nepalese handiwork.