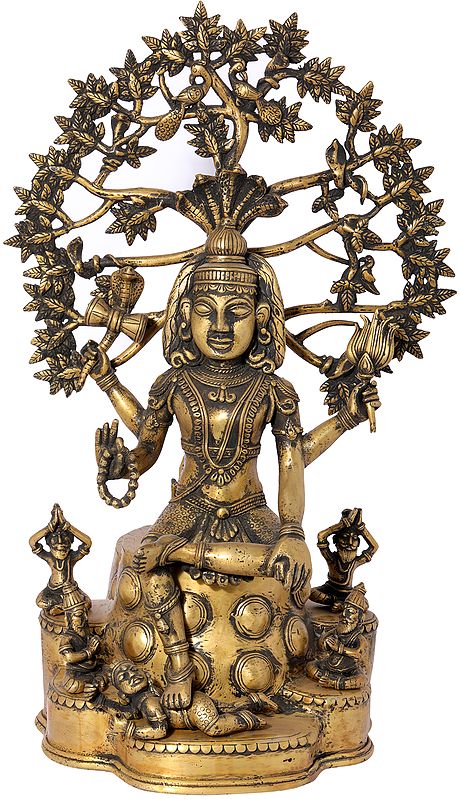 Dhokra is an ancient art form significant for making metal artifacts using the lost-wax casting technique. It is a tribal form of art that dates back to nearly 5000 years and has effectively survived the times test by being in use till date, popular for making human or animal figurines, religious deities, lamps and measuring bowls; for a superfine quality single product, it takes approximately a month as this is a complex art form that involves multiple stages and layers of work type. This tribal Dakshinamurti Shiva sculpture is an apt example of the bronze wax-casting technique, with every feature and accessory molded in realistic styles and designs.

Shiva sits in lalitasana on the distinctively styled deer throne under a banyan tree along with the four sages perched on all four corners near the divine feet receiving his instructions in obeisance. This form of Shiva’s iconography depicts him as being revered as Dakshinamurti Shiva- an aspect of him being the benevolent teacher (guru) who accords wisdom to seekers of salvation. The supreme is garbed in a short length dhoti and multiple necklaces cover his bare torso. The left leg folds over right and the right suppresses the mythical demon of ignorance, Apasmara. He holds the serpent along with a damru and flames in upper hands and the front hands carry a rosary and scriptures respectively; right front hand mudra of index finger touching the thumb tip is specified as Shiva in jnana (gyan) mudra.

He is crowned decently and a five-headed Sheshnaga is topped over it in a beautiful manner. The banyan tree behind his head is formed in a large circular shape having a boundary of bunches of striated leaves, all connected by thick branches. All the branches are flourished with grown-up leaves, small snakes coiled around in peace and a variety of birds and peacocks perched while humming soothing sounds. Each and every curve and expression of the Lord depicts him as being in his tribal form, justifying the values of Dhokra style of art.