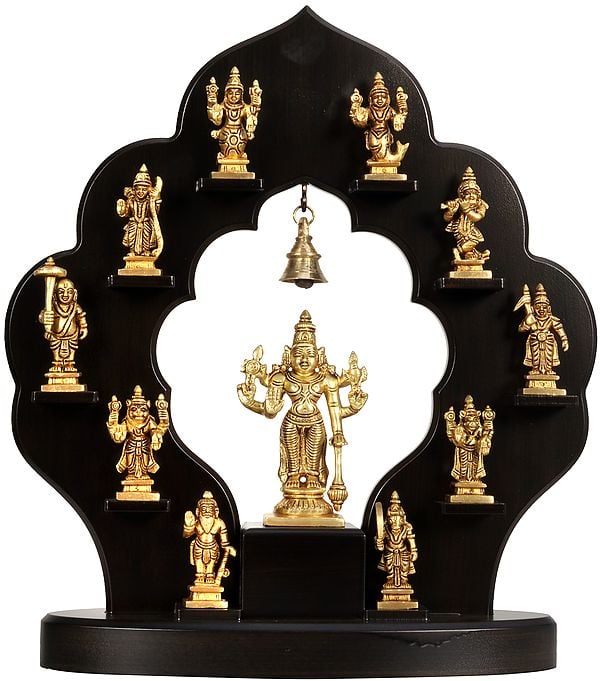 Sculpted here in a unique and stylish manner, the Dashavatras or the ten primordial incarnations of Lord Vishnu are placed in a circular on a black wooden stand of exquisite shape and strong built. The centre space is occupied by Lord Vishnu himself having a bell hung at the top. It is believed that Lord Vishnu incarnates on earth from time to time whenever required to eradicate evil and liberate the devotees from the composite cycle of births and deaths. The most alluring feature of this statue is the way it is sculpted, keeping in mind even the minutest factors of adopting that perfect color combination of black and yellow-gold, gaps and shapes of the figures and the appropriate sizes with Lord Vishnu taking the lead by being formed in the largest size. All the figures are carved in extreme beauty, carrying their iconic attributes in perfection.

Starting from the top left side, the ten avatars are as follows: Kurma (half tortoise-half man)- during the time of Amrit Manthan, Kurma avatar supported the weight of the cosmos on his back; Lord Rama- one of the most prominent deities and a lead character of Ramayana who killed Ravana to establish morality; Vamana (dwarf Brahmin)- he comes to check the growing power of demon king Mahabali by tricking him and sending him to the underworld; Narasimha (half man-half lion)- he ended the reign of demon king Hiranya Kashyap and saved Prahlad to establish dharma on earth; Parshuram (sage with an axe in hand)- he ended the tyranny of evil Kshatriyas for the sake of justice and peaceful mankind.

Hayagriva (Horse headed)- he is the god of knowledge and wisdom, who in this incarnation killed the two demons Madhu and Kaitabha to return the stolen Vedas to Brahma; Varaha (half man-half boar)- he slayed the demon Hiranyakashyap to save Earth; Kalki- this avatar is yet to be born and will defeat the demon Kali (a personification of negativity) and start a new Satyuga; Lord Krishna- a major Hindu incarnation who ended the reign of Kansa; Matsya (half human-half fish)- he helps save all motile living beings, vedas and seeds of all plants to sustain life.