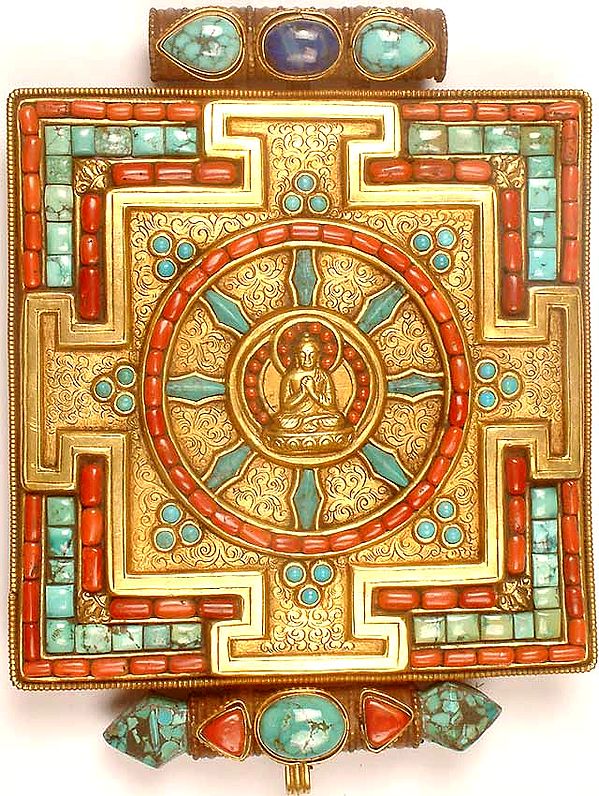 $895.00
Notify me when this item is available
Save to Wishlist Send as E-card Share by Email
A mandala is a sacred diagram of the universe, and encompasses an area in which divine forces are present. A mandala also aids the devotees in meditation when he or she seeks to focus on divinities and to gain access to divine forces. While the Dharma wheel, which symbolizes the first teaching of the Buddha Shakyamuni, helps beings overcome from all obstacles and illusions. Moreover it brings a positive spiritual change in the minds of sentient beings.

The Gau box (Charm box) is in wide use in Tibet, Mongolia, China, and Nepal and throughout the Himalayan area mainly by the Buddhists. The Gau boxes are supposed to possessed talismanic properties. They are meant to ensure auspiciousness, to promote the fulfillment of aspirations, and to protect from harm. Most amulets offer general protection against common, recognized evils: malevolent spirits, witches and ghosts, the jealous eye, black magic, disease, death, infertility and general misfortunate. A Gau can consist of cloth fragments from a lama or saint, soil from a hallowed site, or any material upon which sacred prayers are inscribed. An amulet also contains the image of deity, grains of rice charged with sacred power in a tantric ritual.

The iconography on Gau boxes is consistent with the aims of the amulets contained within, Bodhisattva Avalokiteshvara, the personification of compassion assumes an auspicious one hundred and eight forms to respond to the needs of his devotees. His form Simhanada Lokeshvara is considered particularly effective curing diseases. The five Dhyani Buddhas represent the celestial aspects of the historical Buddha and his various powers. Together they form a sacred assembly, powerful and profoundly auspicious.

The front of the present Gau box depicts a mandala, and the central part of which portrays Shakyamuni Buddha in preaching pose. The image of the Buddha is made of copper. The border of his aureole and halo is made of mm sized red coral balls. The eight spokes of the wheel is made of faceted turquoise. The rim of the Wheel is made of thirty-one coral tubes.

The wheel in general is an ancient Indian symbol of creation, sovereignty, protection, and the sun. In Buddhism the wheel is the symbol of the Buddha's teachings and emblem of the 'chakravartin' or 'wheel turner' identifying the wheel as the Dharmachakra or 'wheel of law'. The Tibetan term for Dharmachakra literally means 'the wheel of transformation' or spiritual change. The wheel's swift motion symbolizes the rapid spiritual transformation revealed in the Buddha's teachings, and as a weapon of change, it represents the overcoming of all samsaric obstacles and illusions. Buddha's first discourse at the Deer Park in Sarnath is known as the first turning of the Wheel of Dharma of the Four Noble Truths  the truth of suffering, its origin, its cessation, and the truth of the Noble Eight Fold Path, which leads to the cessation of suffering.

The space between the spokes of the Dharma wheel of this Gau box is decorated with repouse-work. The area outside the rim of the wheel is also decorated with similar design. The mandala has four gateways in four cardinal directions. A set of three turquoise balls are set in each four gateways and four corners of the square. Four half vajra are depicted in four corners, outside the building. The walls of the square are exquisitely decorated with sixty-seven red coral tubes and thirty-five turquoise rectangles. The Gau box can be suspended by a chain from the reel ornamented tube at the top. Twin large turquoise and an oval lapis lazuli are set on the front of the reel. At the bottom, a similar a reel ornamented tube appears capped with conical ends of turquoise, and below that is a ring for suspending other ornaments or tassel. The outer walls of the box are decorated with zig zag design of wire work with twenty-two triangular red corals.

Robert Beer, The Encyclopedia of Tibetan Symbols and Motifs, Boston, 1999