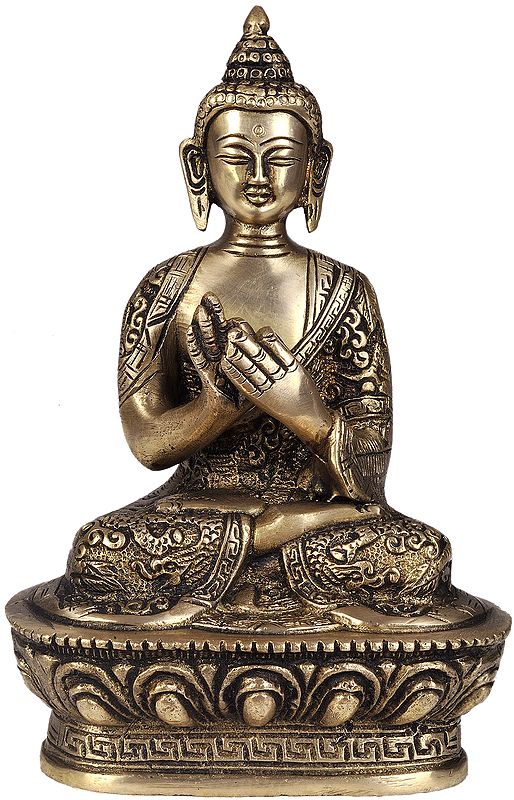 After years of meditation under a tree (Bodhi tree), Gautama Buddha realized enlightenment, that was the cause of abolishing sufferings in the world. His revered teachings have become a ‘world religion’ which glorify us about the four noble truths, which are- bonds of earthly existence, desire for joy, destruction of desire and the path to the elimination of ignorance, hatred and desire.

Buddha here sits in padmasana on a fully bloomed and realistically carved lotus pedestal having a uniquely chiselled border at the base and platform. The posture of his hands depicts the Dharmachakra mudra, which is a gesture of teaching, usually interpreted as turning the wheel of law (Dharmachakra); it is an important symbol of Buddhism, denoting Buddha’s first sermon in the forest of Sarnath, where he had set the Buddhist law in motion. The hands are held in a level with the heart, with the thumbs and index fingers forming circles.

The most astounding part of this sculpture is the lavishly carved robe in the eight auspicious Buddhist symbols called Ashtamangala, endemic to a variety of religions like Hinduism, Jainism and Buddhism. The supreme carvings of the pedestal and robe compliment each other accentuating the beauty of the sculpture and the exclusive shape of his hair.

This item can be backordered
Time required to recreate this artwork
4 to 5 weeks
Advance to be paid now
$14.00 (20%)
Balance to be paid once product is ready
$56.00
Notify me when this item is available
Save to Wishlist Send as E-card Share by Email