Dharmapala Of The Dorje Lhakpa 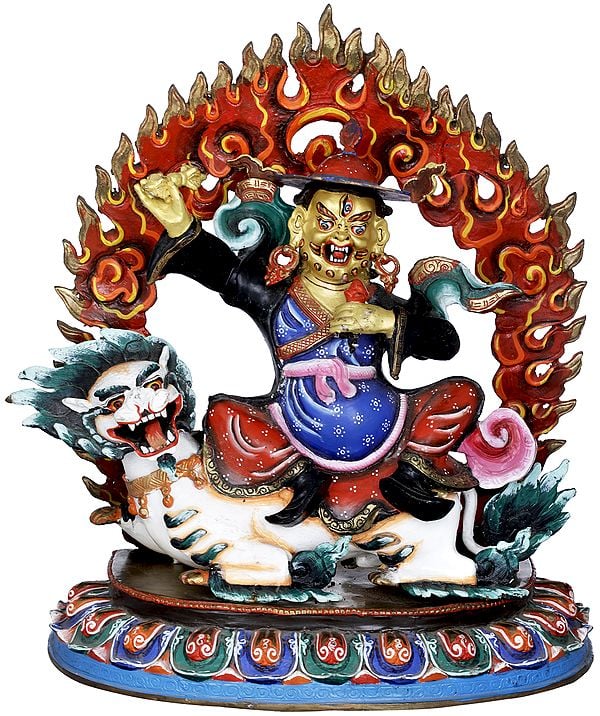 $1595.00
The Dorje Lhakpa is a mountain in Laltang Himal in Nepal. It looms over the valleys of the mountain-country, and is visited by numerous Himalayan enthusiasts every year. The sculpture that you see on this page is of the guardian deity over Dorje Lhakpa. A dharmapala (‘pala’ is the Sanskrt-origin word for guardian or protector), the iconography is replete with all the traditional aspects of the divine guardian angel.

Wrath and ferocity pour forth from the face of the Dharmapala. An element of motion and pace, a kind of dynamism characterises the stance. Such a composure is indicative of the war waged by the Dharmapala against adharma, for the sake of the devotee of dharma. The dharmapala is borne upon a snow lion, a mythical leonine creature known to spew deathly ice and all-annihilating fire in turn. Its composure of countenance is as ferocious as the unforgiving Dharmapala who rides it.

This Dharmapala composition is sculpted from pure copper, a medium that is almost endemic to the great Nepalese sculptural tradition. It is superimposed with a coat of pure gold, such gilded copper works of art being a select aspect of Nepalese handiwork. More aspects of the iconography of Nepalese Buddhist deities abound, such as the flame-like aureole, the pedestal of multicoloured lotus petals, and a palette of strikingly vivid colours.