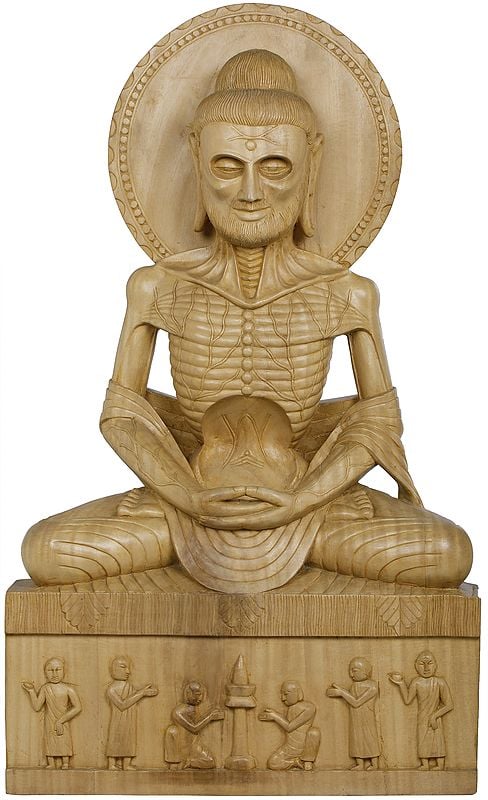 $895.00
Buddha believed that the only way to achieve the complete extinction of mind and body and entry into the state of pure being by undergoing terrible penances such as fasting. Buddha only attained enlightenment after he had abandoned the practice of extreme self-mortification. He discovered the middle way which is a path of neither self-indulgence nor self-mortification. After realizing that self-mortification didn't work he continued his practice toward enlightenment.although these weakened during the fast his sunken state may shock, his body, his spiritual powers became strong. he still conveys the strength — both mental and physical — that more typical representations of the enlightened teacher embody. “Nevertheless, it is not a symbol of death and resurrection but self-empowerment and overcoming of suffering by the human spirit alike.”

A gray schist figure, the “Emaciated Buddha,” is a fine example of the finesse and sophistication of gambhar wood carving, Buddha sat beneath the Bodhi tree, fasting & meditating after having achieved enlightenment. With a torso that reveals his rib cage, bony shoulders, sinewy tendons and the finely corded veins, the sunken eyes, flesh receding to the level of the bone, the taut and wasted musculature, While fasting, his radiant skin became dark. He became very weak and ill.

With the body reduced to a frame of a skeleton, serene & composed Buddha seated cross-legged, back erect, hands folded in the meditation gesture upon the lap – suggests a preternatural calm and steadfast resolve for the ultimate goal of nirvana. Seated on a pedestal whose base features small, carved worshippers gathered around a stupa, With bones and veins so thin and carefully carved they’re nearly indistinguishable from the folds of his long scarf, the seated gray schist Buddha is among the most stirring manifestations of this distinct cultural merger.