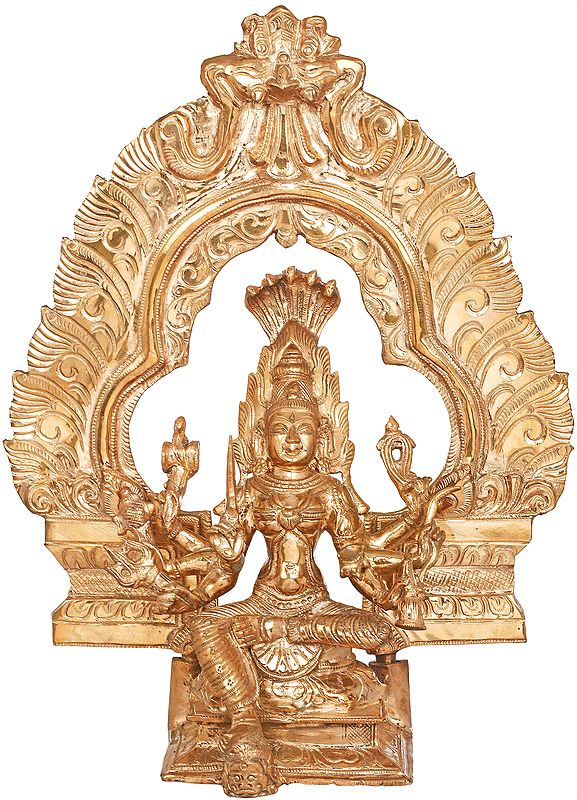 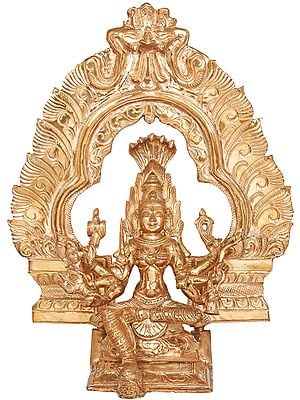 $655.00
Closely associated with Devi Parvati and Devi Durga, Devi Mariamman is a Southern visualisation of Shitala Devi of the North. The quintessential Matridevi (maternal deity) of the rural, or the more agriculturally inclined, populace, She is eternally bountiful, never ceasing to love and give to those who turn to Her with sincerity and good sense. In this ornate panchaloha composition, the ashtabhujadhari Devi Mariamman is seated in lalitasana at the centre of a striking aureole.

Possessed of (‘dhari’) eight (‘ashta’) arms (‘bhuja’), She has the full and fecund figure of a maternal deity. A raging fire for a halo, from the tips of which emerges a five-hooded snake, a symbol of the Devi’s power to ward off adharma in all its forms. Her countenance is at once beauteous and powerful, Her whole form as pleasing to the bhakta as it is terrorising to the adharmee.

Upon an upturned lotus pedestal sits Devi Mariamman. Beneath Her foot is the severed head of evil, and behind Her is a gorgeous aureole that doubles as a temple. A wide-set installation engraved with curves that resemble the flames of an omnipotent fire, done in a shape that is perfectly symmetrical and pleasing to the senses. A signature Kirtimukham at the zenith in conspicuous proportions.