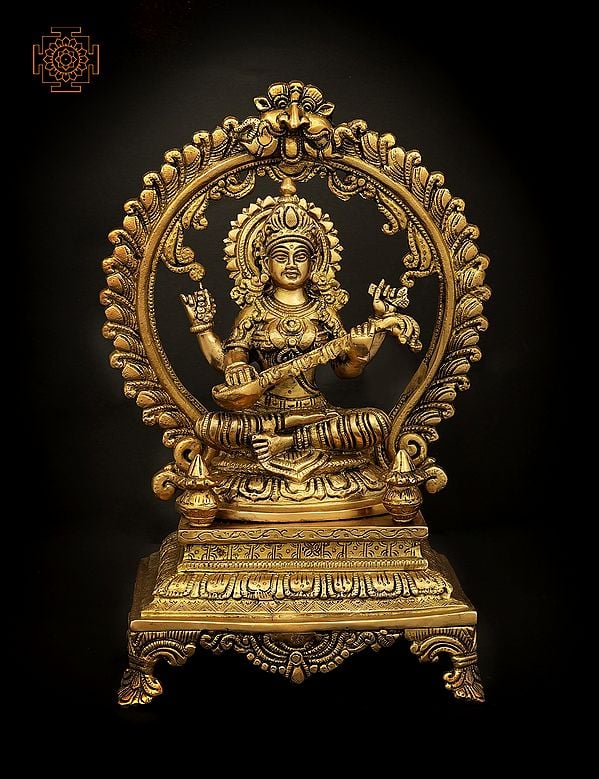 The veenadhari Devi Sarasvati is seated on a flattened lotus throne. Her legs are gathered in a rudimentary ardha-padmasana and She gazes straight ahead of Herself as She strums the veena. The veena is a classical Indian musical instrument, without which the iconography of Devi Sarasvati would be incomplete (‘dhari’ means to be possessed of). After all, as the wife of Lord Brahma, the deity responsible for srshti (creative projection), She is the presiding deity over learning and aesthetics, of which the fine arts is an integral aspect.

It is a compact composition but remarkably rich in detail. Layers of a gold breastband and necklaces on Her torso, ornate karnakundalas that descend from Her earlobes and seem to float about Her clavicles. A perfectly symmetrical crown and an engraved halo whose edge is spiked with miniscule lotus petals. The tiny mukhamandala carved with beauteous features, a composure of equanimity and omniscience writ large upon them. Such a Sarasvati murti fills the heart of the onlooker with love and devotion.

Proof of the artisan’s skill also lies in the plinth and aureole that frames the central seated figurine. The aureole is a perfectly symmetrical structure. A sprig of vine graces the inner edge along the upper arc, while the entire circumference is set off by engraved petal-like protrusions along the outer edge. A Kirtimukham is to be found at the very top of the aureole. Zoom in on the plinth to appreciate the beauty of the handiwork along its multiple engraved tiers and the ornate legs that prop it up.