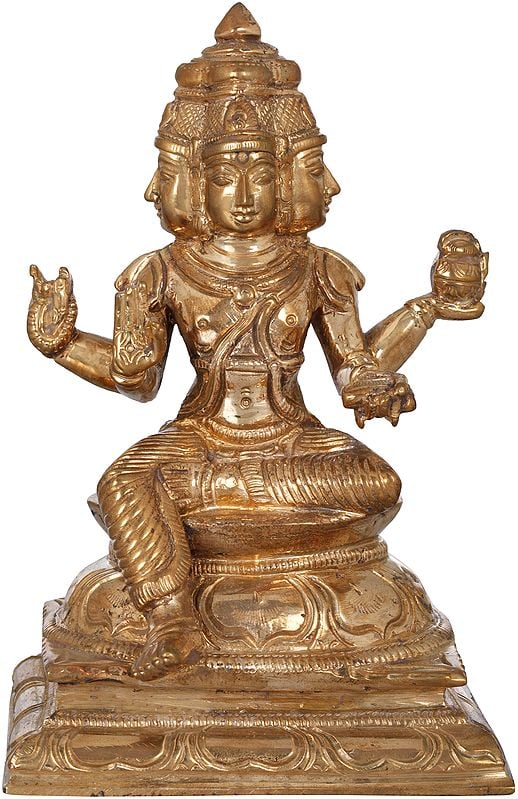 $325.00
Lord Brahma is one of the supreme Trinity Gods apart from Vishnu and Shiva. He creates the earth & everything that flourish on it. With the guided knowledge of his divine consort Goddess Saraswati, he runs the universe. He is also considered as the lord of speech & sound. Although a prominent Hindu deity & the ruler of Brahmlok, the supreme heaven, he is not worshipped as customarily and widely as other deities due to the curse by shiva.

His Vahan is the swan which is the symbol of grace. As he is the creator of all beings, he does not carry any weapons in his hands and often revealed with the white beard symbolizing the nature of his existence This four-headed stunning statue of Lord Brahma is made of Panchaloha Bronze. Seated atop a magnificently skilled heightened podium, attired with alluring dress & bejeweled with fascinatingly necklace, bracelets, armlets & everything in red with four youthful faces ( without the white beard ) & four arms. The four faces continuously chanting the sacred four Vedas ( Rig; Yajur; Sam and Atharva represent all knowledge) and the four arms holding a rosary, a book, a kamandalu or water-pot in each of the three hands and lower right hand holding the Japmala of Rudrax beads bestows blessings towards everyone who seeks refuge.

Each hand has its representation where the Rudrax beads are the substance through which the creation took place, the holy book signifies knowledge and the Kamandalu symbolize s nature and living essence of life that exists. The arms represent the four directions of the creation and Brahma, adorned with a splendid headgear crown as the one universal Lord. A real masterpiece of Indian handicrafts to decor your home.