Ganesha on his Lotus Throne 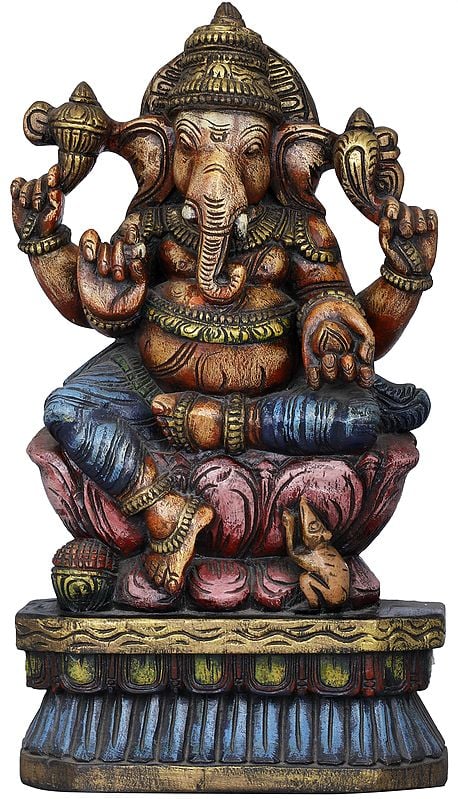 Filled with dull yet intense color strokes that arouse Ganesha’s sharp and vigilant composure, this deity sits on a full bloom lotus throne carved in a realistic gesture, which itself is placed on a unique and heighted flower petal pedestal. The striking expressions of his face and that of his eyes depict his duty and devotion to always win the battle of good over bad and save mankind.

This portly figure is adorned with ancient and ethnic gold jewels- royal necklace, bracelets, anklet and a floral patterned kamarband; perched in lalitasana and carries his favourite sweetmeat, motichoor laddoo in the left front hand, while right holds his broken tusk which was chopped off by Lord Parshuram as he was being detained by Ganesha to pay obeisance to Lord Shiva, so out of rage he threw his axe, which Ganesha took on his tusk instead of fighting back, as that was a gift from Shiva himself; other two hands carry the sacred implements to remove obstacles and flourish love and peace.

Serrated trunk, chiselled Shaivite tilak and the beautiful flower haloed gold crown accentuates deva as the patron of arts and sciences and the lord of intellect.