Ganesha With Parasole And Kamandalu, Under An Ornate Kirtimukha Aureole 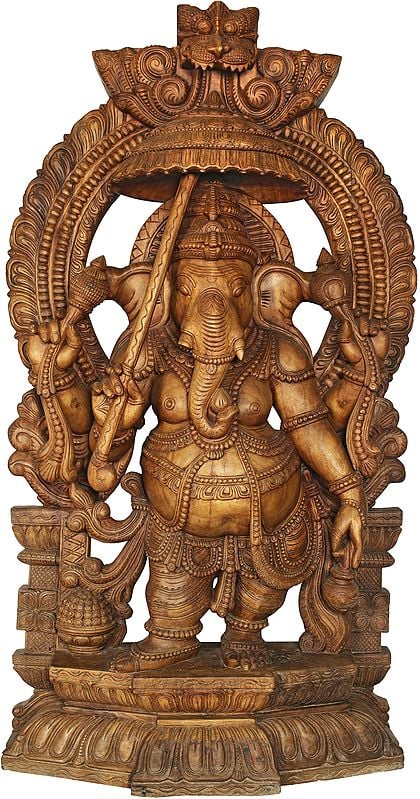 $3495.00
When one begins to look for the beloved Ganesha in itihasa, the older of the two, which is Ramayana, yields no result. One would expect the great Lord of auspicious beginnings to be invoked during Rama's departure to the woods or Hanuman's to Lanka in the search for Seeta, but it is not until the advent of Kaliyuga that the Ganesha cult evolves. When Krishnadvaipayana Vyasa had the greatest of epics composed in his mind, He turned to Lord Brahma in search of a scribe worth the task. It is upon His suggestion that he meditated upon Ganesha to invoke Him to be his scribe. Ganesha's condition was that his motions with the pen be not interrupted once He begins; Vyasa's, that He not pen down anything without understanding it first. With the sacred syllable of AUM etched at the beginning of the manuscript, Ganesha thus began the writing of the Mahabharata.

Indeed, no other deity of the Hindu pantheon could have made a better scribe for the greatest epic known to humankind. While His appearance is not on par with the characteristic handsomeness of Indian deities, it is His adorably boyish form that devotees love. His pot belly gives away His undying love of laddoos (He is holding one at the tip of His trunk). His chubby limbs are every ready to break into dance or to be raised in blessing. The innocent elephant-head stands for all the gentleness and wisdom associated with the mortal animal. This one-of-a-kind wood-cut sculpture of the Lord depicts Him in the midst of a walk along divine pathways, with a kamandalu in one anterior hand and an ornate parasol in the other. Lotuses about to bloom are in His posterior hands. His befitting silks and shringar are matched by the glamour of the Kirtimukha aureole that frames the composition and the grandeur of the pedestal on which the same is placed.

This item can be backordered
Time required to recreate this artwork
20 to 24 weeks
Advance to be paid now
$699.00 (20%)
Balance to be paid once product is ready
$2796.00
Notify me when this item is available
Save to Wishlist Send as E-card Share by Email