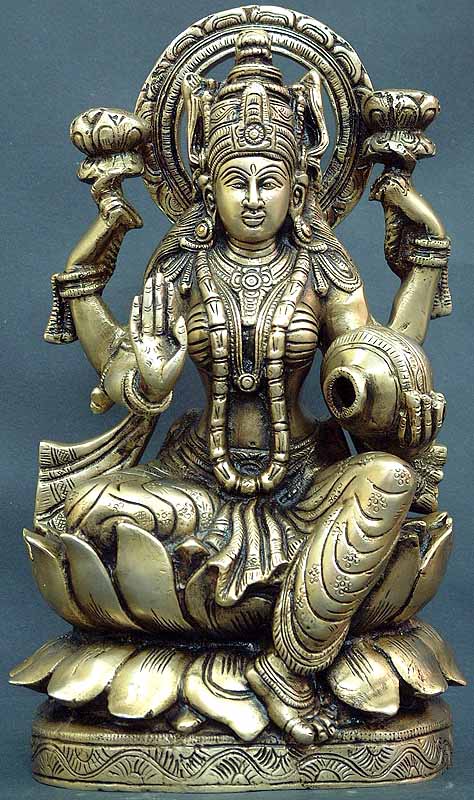 $354.00
Notify me when this item is available
Save to Wishlist Send as E-card Share by Email
Goddess Lakshmi Goddess Lakshmi is personified not only as the bestower of fortune and wealth but also as an embodiment of loveliness, grace and charm. She is the goddess whose presence in any home or establishment is said to ensure continuous prosperity and peace.

Iconographically, Goddess Lakshmi is described as a fair lady, generally with four arms, seated or standing on a lotus, dressed in fine garments and precious jewels. She has a benign countenance, is in her full youth and yet having a motherly appearance.

The most striking feature of the iconography of Lakshmi is her persistent association with the lotus. The meaning of the lotus, in relation to Goddess Lakshmi, refers to her purity and spiritual power. Rooted in the mud but blossoming above the water, completely uncontaminated by the mud, the lotus represents spiritual perfection and authority. Two divine characteristics of this supremely popular goddess.

Lakshmi is the Goddess of wealth and prosperity, both material and spiritual. The word 'Lakshmi' is derived from the Sanskrit word 'lakshya', meaning 'goal'. Goddess Lakshmi, therefore, stands for the goal of life, which includes worldly prosperity as well as spiritual prosperity.

Seated on a lotus in the graceful Lalita Asana (one leg pendant and the other resting on a lotus flower), Devi Lakshmi being the Goddess of prosperity, is appropriately bedecked in a rich array of ornaments; including a ornamented crown, a profusion of necklaces and various bracelets and armlets. Significantly in addition to being seated on it the Goddess also holds the lotus flower in two of her four hands. This is to display her persistent association with this spiritually significant flower. It signifies that when one lives in this world, one can enjoy its wealth, yet not become obsessed with it. Such a living is analogous a lotus that lives in water but does not become wet by it.

Her four arms themselves signify the four directions, denoting the omnipresence and omnipotence of the Goddess. Significantly the Goddess is depicted with four arms only when depicted alone. When shown with her husband Vishnu, she is shown with two arms only.

Of her remaining two hands, the right makes the gesture of granting boons. The left holds a vase, known in Sanskrit as kalasha. It is a symbol overflowing with abundance, wisdom and immortality, signifying the boon of the goddess.

Jansen, Eva Rudy. The Book of Hindu Imagery, The Gods and their symbols: Holland, 1998.

May You Prosper (Kalamkari Painting)

Lakshmi and Saraswati - Tales in Mythology and Art (Article)