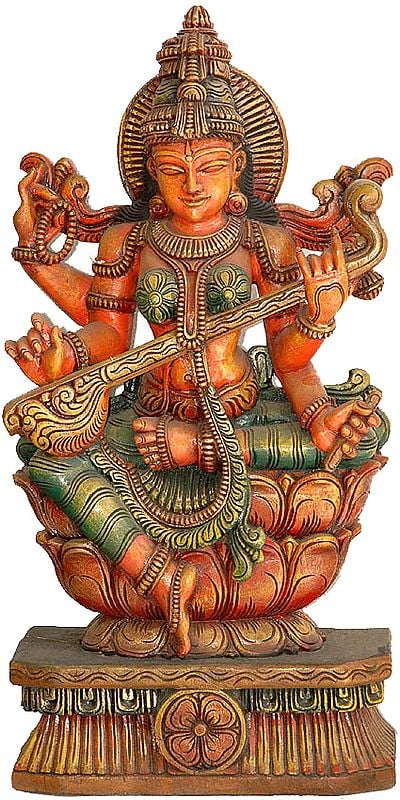 $1200.00
This item can be backordered
Time required to recreate this artwork
20 to 24 weeks
Advance to be paid now
$240.00 (20%)
Balance to be paid once product is ready
$960.00
Notify me when this item is available
Save to Wishlist Send as E-card Share by Email
Saraswati is the goddess of both wisdom and music in the Hindu Pantheon. She is venerated alike by the Buddhists and Jains. Seated here on a three-layered high lotus, she plays the veena with her main hands, while the third and fourth hold a book and rosary respectively. The veena is scrolled with vegetative motifs.

The name Saraswati comes from "saras" (meaning "flow") and "wati" (meaning "a woman"). So, Saraswati is symbol of knowledge, whose flow (or growth) is like a river.

She wears a high, towering crown typical to South Indian aesthetics. It is known as ‘karandamukuta.’ Such a headgear symbolizes the supreme status the deity enjoys in the Hindu Pantheon.

This statue was carved in the city of Salem, Tamil Nadu. The sculptor is Shri P. Sengottuvel.