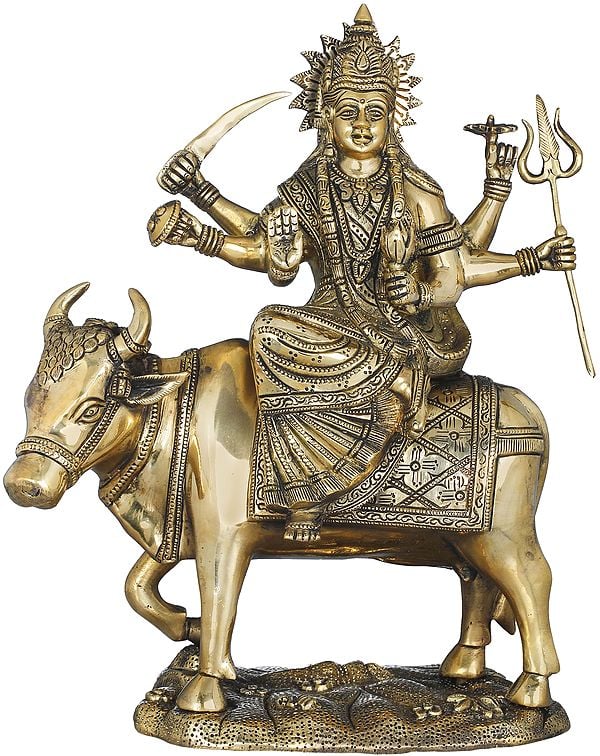 €279.65
Durga, identified as Adi Parashakti, is a principal and popular form of the Hindu Goddess. She is a goddess of war, the warrior form of Parvati, whose mythology centres around combating evils and demonic forces that threaten peace, prosperity, and Dharma, the power of good over evil. She is also a fierce form of the protective mother Goddess, who unleashes her divine wrath against the wicked for the liberation of the oppressed, and entails destruction to empower creation.

The irate personality of Durga Maa is carved in an umber, brass figurine that sits over a strong, embroidered-cloth-covered bull. The essence of her violence is characterized by a sharp trident and a dagger that she carries in her hands. It is a source of enlightenment as a beautifully carved aureole illuminates the mind of the onlooker with this artistic creation. Her sculpture is festooned with a garland along with a beautiful Gujrati sari that adorns her, as a grim expression sets across her finely-carved face.

Her icon shows her in action, yet her face is calm and serene due to the belief that she is protective and violent not because of her hatred, egotism or getting pleasure in violence, but because she acts out of necessity, for the love of the good, for liberation of those who depend on her, and a mark of the beginning of soul's journey to creative freedom. She is the wife of Shiva and the daughter of Daksha. In regard to her worshippers, she is a punisher for those who oppress and a blessing for those who do good in their lives.