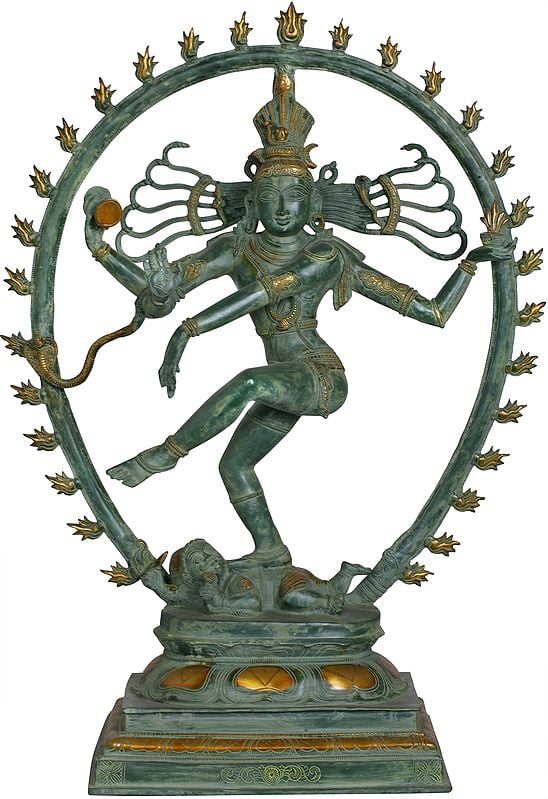 The Haunting Beauty Of Lord Nataraja

FREE Delivery
Only 1 available
$1175
An unusual bitone composition of the powerful Lord Nataraja. An unmistakable silhouette, annealed thoroughly into the Hindoo psyche. The etymology of the name is purely aesthetics: ‘nata’ is Sanskrt for dance, ‘raja’ for lord. However, it is no ordinary dance - it is tandava, the cosmic dance ritual of Lord Shiva. It wreaks destructive havoc on the macrocosmos, only to give birth to existence anew.

The tandava of Lord Nataraja runs deeper than destruction and projective srshti. Zoom in on the subdued figure at the foot of the Lord. He is Apasmara, an epileptic the symbol of avidya (ignorance). The majestic figure that towers over Him hence translates to vidya (awareness) itself. The other leg raised in the air, the fearless (abhaya) mudra of the anterior hands and the flame and damroo in the posterior ones. Broad shoulders tapering down through a sharply posed torso to slender hips. The haunting beauty of Lord Shiva has been captured with great skill and perfection in this ashen teal composition.

Zoom in on the equanimous face of Lord Nataraja. Strategic proportions of gold are to be found in His flaying locks and on the crown that towers above His head. More of it lies in the ring of flames at the aureole, the lotus petals on the pedestal, and the snakes and other adornments on His person, making it a statement bitone murti.