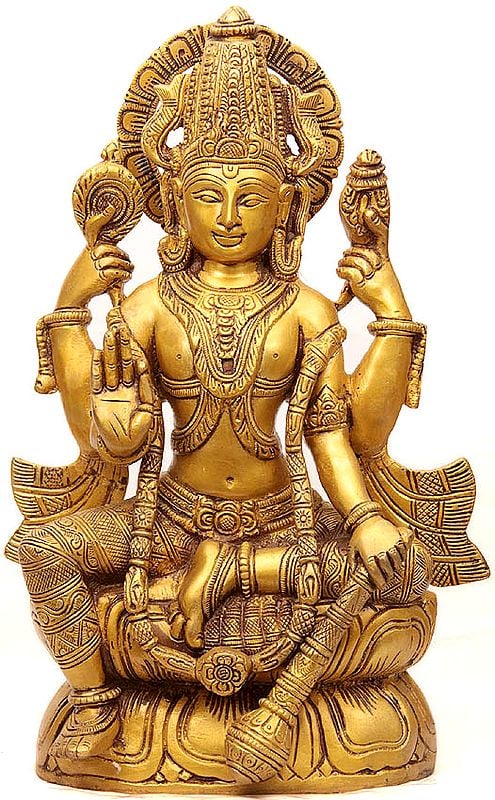 FREE Delivery
$295
Quantity
Usually ships in 10 days
Notify me when this item is available
This brass image of Lord Vishnu as Chaturbhuj – four-armed, seated on a large full blown lotus in ‘lalitasana’ – a sitting posture with right leg suspending below, and left, laid horizontally along the seat’s top revealing ease and beauty of form, is not only rare in Vaishnava iconography but also highly innovative. With the height perspective reduced a little, and the breadth, little expanded, the image seems to have been especially conceived on votive lines for a sanctum. Lord Vishnu’s usual images, either as standing or as reclining on the coils of the great serpent Shesha, being either too much vertical or too much horizontally thrusting, little fit in a sanctum which is usually a square space. Apart, the eye fails to cover in full and hence meditate on vertically or horizontally inclining forms and thus a vertical or horizontal image does not naturally descend into mind and transform into a spiritual image, which is such image’s primary thrust. More importantly for Vaishnava cult, holding his regular attributes : ‘chakra’ – disc, ‘shankha’ – conch, and ‘gada’ – mace, assuring ‘abhaya’ – protection, or freedom from fear, and imparting knowledge this image, even as seated, is operative as should have been that of Lord Vishnu, the cosmic commander.

Cast of fine quality brass with gold-like lustre and every article : ensemble, attributes, crown, ‘prabha’ – disc framing the face like a halo, ornaments …, associated with the image most aesthetically incised, this brilliant image of Chaturbhuj is endowed with great majesticity and divine aura. The Vedas perceive him as one who has the nature to ‘expand’, that is, covering all known and unknown spaces – the cosmos, and thus pervades them. Maybe, it was under this Vedic perception of Vishnu that his two more usual and initial visual forms, one reclining on the coils of serpent Shesha over the Kshirasagara – ocean of milk, and the other, standing, were discovered. Serpent Shesha was seen as symbolising the known cosmos that Lord Vishnu, while reclining on it, pervaded. His figure extended also beyond serpent Shesha , which symbolised that he pervaded also the unknown spaces. In standing posture he pervaded all spaces by treading over them, covering them in entirety in three strides even in his dwarfish form of Vamana. Thus, in one form he pervades the cosmos by his presence, and in the other, by spanning it with his feet.

At first glance this characteristic mysticism and symbolic breadth of the traditional Vaishnava imagery seems to be missing in this brass image. However, the artist of this image has taken care of all such mystic dimensions by introducing a lotus for the great Lord to seat. Far more than any single article or entity, serpent Shesha or any, lotus symbolises the cosmos, its three elemental regions, water, earth and space, and its odour, aura and grace, all other spaces to include the ‘unknown’. Apart, in this form, two arms carrying disc and conch extended to right and left, and his outwards turned knees, one forwards-thrusting, and other, keeping back : a delightful geometry covering all four directions, and with the towering crown above, and the right foot below, his figure has been conceived to pervade entire cosmos : all directions and all spaces above and below. The gesture of the normal right hand symbolises freedom from fear which his disc and mace further assure, and the interknitted forefinger and thumb enlighten the darkness which the conch dispels by its sound.

The statue is outstanding in casting thread-like fine details and embellishing the entire image. Excellent in modeling, plasticity and ornaments for greater aesthetic beauty the figure of Lord Vishnu has been installed on a lotus, not a lotus seat with stylized lotus patterns. There enshrines on the face of the figure a divine concern for the entire creation. The figure has been conceived with sharp features : oval face with a fully aligned chin, half-closed lotus eyes with elegantly carved eyebrows, sharp pointed nose mildly arching in descent, well-defined lips …, balanced anatomy and regular ornaments especially the towering crown, ‘makara-kundalas’ – ear-ornaments designed as a crocodile, breast-ornaments, belly-belt, something quite curious and unusual, and large Vaijayanti. As elaborate is his ‘Pitambara’ – the yellow lower wear, and sash unfurling on sides. The Creation’s sustainer, Lord Vishnu, one of the Great Trinity, has been appropriately conceived as carrying in three of his four hands his usual attributes and assuring ‘abhaya’ with the fourth.