Enthroned Sarasvati With her Vahana On A Three-Legged Stool 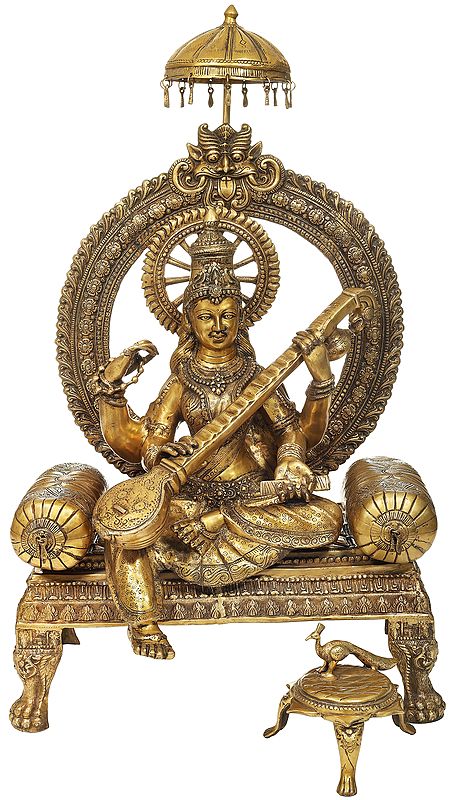 The stately Devi Sarasvati is seated on an ornate throne. Her legs are gathered in lalitasana, the folds of Her saree spread beneath Her lotus feet. On either side of Her is a bolster, indicative of the luxuries of paraloka (otherworldly realm of existence) that is Her home. A statement aureole frames Her seated figure, forming a kind of frame around Her together with the wide-set throne. A Kirtimukham motif at the zenith, without which the traditional iconographies of Hindu deities are incomplete. It is a motif that conveys all-encompassing annihilation and ferocity (zoom in on the same to appreciate the detail with which these aspects of the Kirtimukham have been conveyed). A prasol high above completes the composition.

The chaturbhujadharini plays on the veena. She is the presiding deity over learning and the fine arts; as such, this classical musical instrument is indispensable to Her iconography. The anterior right hand is poised upon the base of the veena’s neck, while the posterior left strums at the tapering end. In Her remaining hands are a pothi (manuscript) of the Vedas and the rosary. The roopa (form) of Devi Sarasvati is as slender and curvaceous as the veena itself, Her presence as divine as the music that emanates from its body. A solemn, supremely focussed composure of countenance and an inward-curving crown sitting gracefully on Her head. The vahan (mount) of Devi Sarasvati, the peacock, is poised on a three-legged stool that may be placed anywhere within the vicinity of enthroned Sarasvati.