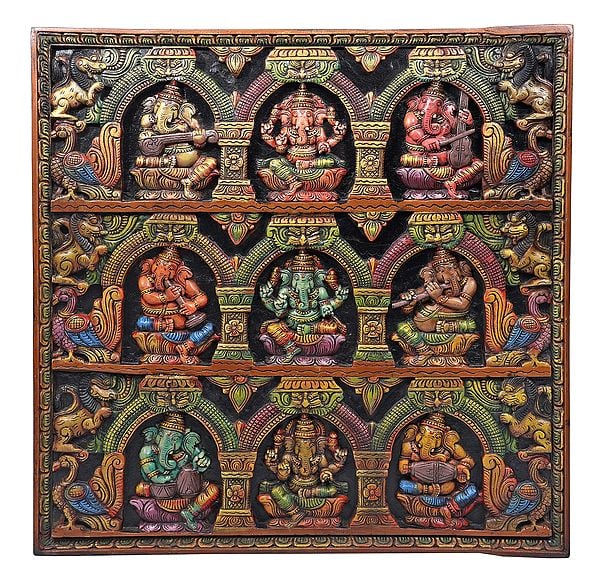 As the favourite son of Shiva-Parvati, Lord Ganesha is widely revered as the adorable baala-deva (boy-deity) of the Hindu pantheon. As the son of the wrathful Shiva, He is often depicted as a warrior, a multi-limbed and multi-headed one at that. Next to His sisters, Devi Sarasvati and especially Devi Lakshmi, He is portrayed as this calm, gathered deity to whom anyone in distress may turn for succour. As such, the musical aspect of Lord Ganesha is little known and an unusual theme for artisans to work with.

The wood-carved panel that you see on this page is an ensemble of compact Ganesha figurines. There are three rows of three forms each. Each of the Ganesha-roopas (forms) in the extremities are holding a musical instrument - string instruments in the upper row, wind instruments in the central row, and percussion instruments in the lower row. The figures that form the central column are simple chaturbhujadhari (four-armed) figures, meting out blessings in the traditional iconography of Ganesha.

Speaking of traditional iconography, the figurines are all in lalitasana, seated on a gigantic lotus bloom, and wear a tapering crown of gold on the head. Each of the spaces within which the figures are contained is demarcated by a temple-style aureole with the customary Kirtimukham motif. Animals of a mythical nature - peacock- and lion-like fauna - are to be found along the vertical edges of the panels. A riotous colour palette and skilful execution of the sculpture makes this work a must-have.