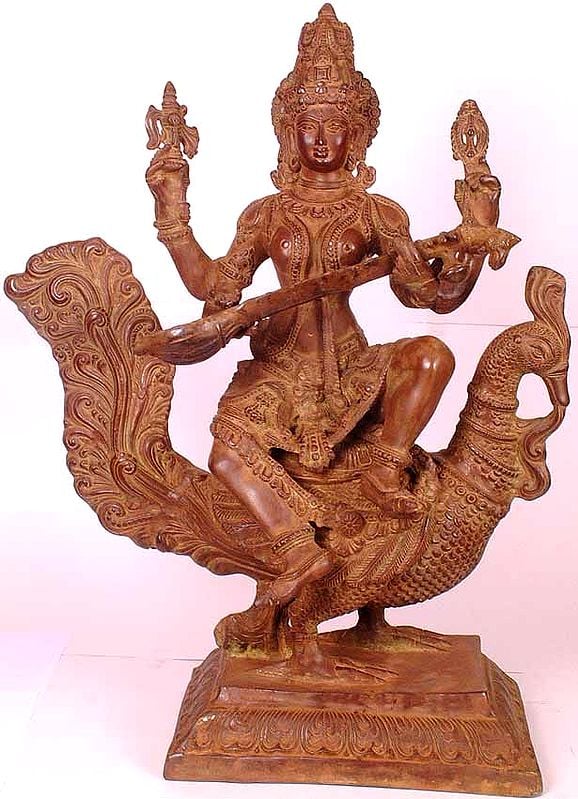 $2000.00FREE Delivery
Usually ships in 10 days
Notify me when this item is available

Saraswati, the goddess of learning, music and art, also known as Vak, Vagdevi, Bharati, Sharada, Vagishvari, or Veenapani is the one who rides a swan, bears the garland of white lotuses, imparts bliss by her speech, has a benign face and a gentle smile on her lips. The nectar of learning and melodies born of her lyre fill the pot she has with her. The white complexioned Bharati has radiant palms, carries a rosary and wears white costume. 'Parama jyotirupa' or 'jyotiswarupa' Saraswati, possessed of timeless youth and lustre of crores of moons, sandal's fragrance, tenderness and glow and the soothing softness of snow, could only be conceived as having a milky white complexion. This describes precisely her form in early centuries of the medieval era. A Saraswati statue, now in British Museum, attributed to legendary king Raja Bhoja of Malwa (A.D. 1018 to 1060), who is known to have built the much talked about Bhojashala at Dhar, and another one of the same period from Suhania in Madhya Pradesh, now in Gwalior Museum, are two of the widely quoted examples of this form.

Saraswati, the earliest of all Brahmanical goddesses, is, however, perceived, in earlier texts, as seated on lotus and carrying in her four hands attributes of Brahma. Veena and swan are not found in pre-medieval texts. In Rigveda she is Vak and is invoked as the goddess who with her light illuminates all and brightens all pious thoughts. In Rigveda, Vak has been perceived as the inherent power of 'mantra', known in Vedic literature as Brahman. The 'mantra', or Brahman, subsequently personified as Brahma and Vak, born of Brahman, as Brahma's daughter. The Creation became manifest by Vak, or speech, hence, Vak subsequently began representing Brahma's consort.

Despite such intricate origin, formative deviations and multiple manifestations Saraswati has always remained in extensive reverence as the goddess of light, learning, arts, music and of all that is creative and blissful, though among temple deities she had only secondary place. Other goddesses belong to this or that sect, but Saraswati is an integral part of Indian pantheon -Brahminical, i.e., Hindu, Boddha and Jain. The Jain pantheon has sixteen manifestations of Saraswati and Boddha five. In Buddhist Tantrism, she has been manifested as the Tantrika deity. Icons of Saraswati are considered highly auspicious and her presence in a dwelling brings light, learning and bliss. In academic, artistic, theatrical, musical and cultural institutions an icon of Saraswati is a must.

This 75 cm. tall and 56 cm. wide brass statue has the look of a medieval bronze masterpiece. In its technique of casting, textual prescriptions and art-merit it marvels the Chola and Pala art of bronze casting. A well defined anatomy with each member fabulously bejeweled is characteristic to Southern Chola bronzes. The large towering crown is especially cast in Southern art style. The unique emotionality, with which figure's face is charged, is the attribute of Pala art. A gentle smile on lips, deep emotion in eyes, moving fingers and the music emitting from her 'veena' impart to the image its celestial quality. Prominent eye-lashes, sharp nose, small cute lips, receding chin, heavy neck, temptingly protruding breasts, narrow waist, all are reminiscent of the golden era of India's sculptural art. The goddess is riding a bird, which has swan's majesty and peacock's charm.