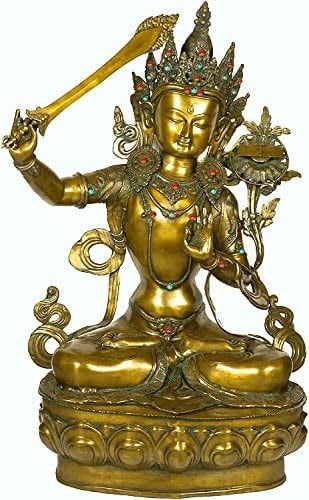 ¥279440
Usually ships in 10 days
Notify me when this item is available
Save to Wishlist Send as E-card Share by Email
This forty inch high and twenty-six inch wide brass image represents one of the early forms of Manjushri, the Buddhist god who stands for wisdom and knowledge, more particularly the knowledge of linguistics and grammar. The image of the deity, with its two arms and the book  Prajnaparmita, carried over a lotus, pursues initial idiom of Manjushri imagery. One of the would-be Buddhas, Manjushri also symbolised, like other Boddhisattvas  Avalokiteshvara, Metreya, Padmapani, etceteras, different stages of soul's attainment of Buddhattva. In early innovations, Manjushri images had normal two arms, and only rarely four, carrying in one of them a 'khadaga', sword, and in the other the book Prajnaparmita. Sometimes the book was carried over a lotus, and the arm other than the one, which carried 'khadaga', had a diamond  Ratna-mani or Chintamani, which symbolised truth, as like truth, it neither rusted nor defaced or eroded. With the sword, Manjushri is conceived as eliminating darkness, and with the book, as spreading true knowledge.

Later, when Manjushri emerged as one of the main Tantrika deities, particularly in Tibetan Buddhism widely pursued in the northern regions of Himalayan hills, the anatomical and iconographic perception of the image underwent a radical change. Now the image was multi-armed, the number of arms varying from four to eighteen. 'Khadaga' and the book were still the essentials of Manjushri iconography, but now it also carried many other attributes  'Ratna-mani', 'abhaya', 'varada', 'vajra', 'danda', mace, battle-axe, pot, rosary, noose, flames of fire, and many others. They symbolised his multifarious role, which as the Tantrika deity Manjushri was invoked to accomplish.

This exquisitely executed and exceptionally bejewelled image has been rendered with a broad forehead, as broad face but narrowing down to chin with an angular thrust, and half-closed eyes, as in meditation. The iconography, adornment and costume are characteristically Tibetan. Normally, Boddhisattva images, including Manjushri, carry in their coiffeur effigies of Dhyani, or meditating, Buddha, but in this image the effigy has been substituted with a crest of diamonds rising flower-like from a three-leaf base. Three leaves of the base and five petals of the crest make eight; three symbolising, perhaps, three basic rules of Buddhism, and eight, the eight-fold path of the Dhamma.

The deity is seated on a high and beautifully designed lotus 'pitha'. He is in padmasana. The auspicious marks of lotus, carved on upward raised feet, as also on palms, further enhance the auspice that a lotus creates. The image is carrying in his right hand the 'khadaga'. Its handle consists of 'vajra', and the point of the blade, of the flames of fire, obviously because fire and 'vajra' are other usual elements of Manjushri iconography. In the other hand, he is carrying a small object, which may be 'Ratna-mani'. From under this arm there rises a lotus stalk with a lotus on its apex. The lotus carries on it the book. The large circular 'kundalas', ear-ornaments, correspond to 'Dharma-chakra', often comprising part of 'prabha', not included here. A lavish and richly bejewelled crown with seven leaves adorns the deity head, and an as rich 'khata', the sacred scarf, wraps his shoulders. A mild 'trivali', three-fold form, defines the neck. 'Dhoti', sash, girdle on the waist, necklaces and other ornaments are richly designed.