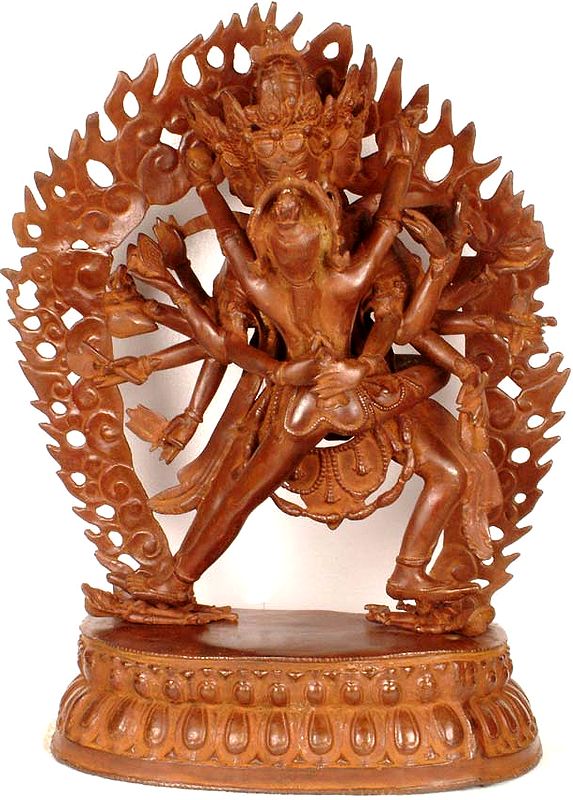 $1405.00
Notify me when this item is available
Save to Wishlist Send as E-card Share by Email
This depiction of the god Shamvara and his consort Vajravarahi is a work of electrifying intensity. Shamvara's brow is knitted in anger; typical of the Heruka type of deity, his expression is midway between peace and warmth, thus although his brow is furled, he lacks the bulging eyes and gaping jaw of a full-fledged wrathful deity.

Shamwara has four faces and twelve arms. His first two arms are wrapped in passionate embrace around his consort Vajravarahi. The first two hands hold a vajra scepter and bell.

Shamvara's hair is arranged in the coif of a yogi and is decorated with a lunar crescent. This is a reminder that he was first worshipped by the wandering ascetics of medieval India, and that he shares some attributes with Shiva. According to legend, the Hindu god Shiva became the Buddhist deity Shamvara, and his teachings were brought to Tibet in the eleventh century. Both Shiva and Shamvara are supposed to dwell on Mount Kailash, a place for pilgrimage for Hindus and Tibetan Buddhists. His name too, for example, is related to Shamba (Fortunate), an epithet of Shiva.

Several forms of Shamvara are known. The sadhanamala, a 12th century manual of iconography, identifies this form as Chakrasamvara. In Tibet, Chakrasamvara is a deity particularly associated with the Kagyu Order, although he is important to the Geluk and Sakya as well (Beyer, p. 52). The name Shamvara, or Shambara, itself means Supreme Bliss, the bliss that is the fruit of Tantric meditation. Similarly, Chakrasamvara, literally "joined to the wheel," may be interpreted as "joined to the wheel of wisdom and bliss." Equal to a Buddha, Shamvara is beyond the extremes of samsara and nirvana. His left foot rests on Bhairava, the Terrifier, who represents samsara (Snellgrove, pp. 153-54).

Shamvara is a deity of the yidam class, which are personal deities of Buddhist meditation. A yidam is at once the embodiment of a philosophical view and a role model, for the meditator, of the Buddha he aspires to become. A yidam is a "pure appearance," a vision of purity. Tibetans say that rather than having an ordinary physical form, such a deity is a congerie of pure symbolic elements. Thus, the deity's attributes are of paramount importance; they are clues to his identity and to his function in meditation and ritual. According to Snellgrove, the symbolic interpretation of Shamvara is as follows:

Each of his face has three eyes, indicating that he sees the (whole) threefold world and that he knows the substance of the three times (past, present, and future). He has twelve arms indicating that he comprehends the evolution and reversal of the twelvefold causal nexus and eliminates these twelve stages of transmigration.

Shamvara and Vajravarahi in Yab Yum