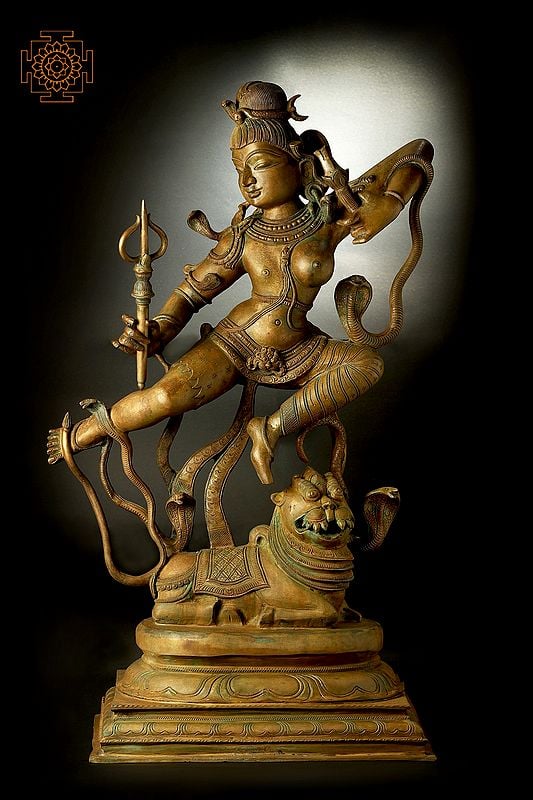 Ardhanarishvara translates itself as ‘Lord who is half woman’ and depicts the composite androgynous form if lord Shiva and his consort Parvati. This synthesis of male and female forms for effecting creation has its roots in the ancient texts and holds a deeper meaning and cosmic significance.

It is said that when Shiva and Parvati got married, Parvati insisted Shiva to experience his state of being, so Shiva made her sit on his left lap and pulled her within himself, thus shedding half of himself and included Parvati. This merger of inside and outside is very finely depicted in this bronze statue, specially carved by expert artisans from Swamimalai, featuring each and every detail and difference of masculinity and feminity in a superfine way.

Ardhanarishvara form is a symbolism of creation where the two dimensions, Shiva, the male principle of god and Shakti, the sacred feminine, as Purusha (man) and Prakriti (nature or creation) respectively merge with each other highlighting the all-pervasive and all-enduring nature of lord Shiva. This unconventional bronze statue of Ardhanarishvara is carved in a dancing posture depicting the divine in a joyous and loving essence. Lord Ardhanarishvara is also known by the name ‘Ardhanarinateshvara’ which means ‘the God of Dance (who is half woman)’ which is aptly justifiable in this superfine bronze sculpture. The left side is carved with Parvati’s body, adorned in a beautiful designer ankle length dhoti holding a lotus near her left ear; right side depicts lord Shiva holding a stylized trident and garbed in a short length dhoti carved like the tiger skin along with a kamarband ornated with Kirtimukha broch.

The dancing stance of Ardhanarishvara in this bronze sculpture with the legs postured sharply on one side, hands holding the traditional weapons and face gestures (elongated eyes, high curved eyebrows, sleek and pointed nose, soothing smile and the third eye of wisdom) in a feeling of eternal bliss are an indication of the extraordinary skills of the sculptor and the painstaking time taken to create this masterpiece. Lord is ornated with sober jewels all over the body along with serpents wrapped around every body part as an embellishment of Lord Shiva. Zoom in to the beauty of matted hairs, carved in a marvellous style with a serpent and half-moon decorated over it.

Every carve of this Ardhanarishvara bronze sculpture is a different level of perfection in itself and lord Shiva’s mount, Nandi sits on a multi-layered lotus engraved pedestal having a unique ferocious Kirtimukha face, being the guardian deity warding the edifices of all evils. Have this sculpture in your office, hotel or house corners for an ancient and adorable décor.