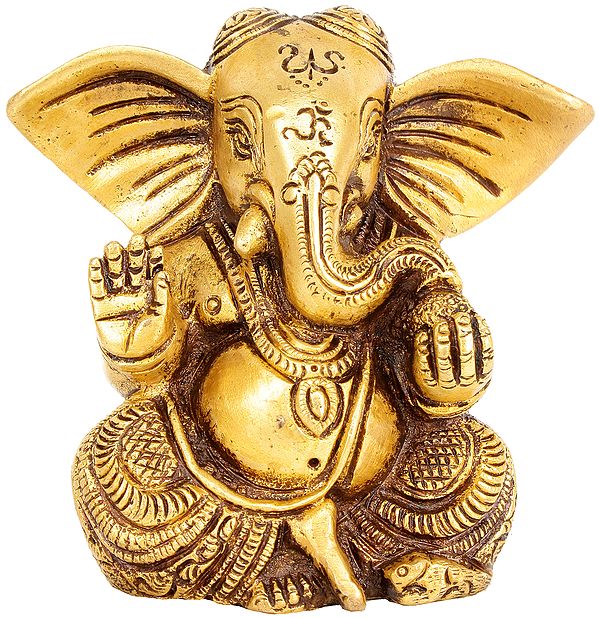 $57.00
Lord Ganesha is known by his many attributes but the most striking is his elephant's head. According to Shiva Purana, Ganesha was the son of Lord Shiva, the god of destruction, and Lady Parvati, the daughter of Himalaya, the King of Mountains. Once Lord Shiva came to visit Parvati after a long absence. Ganesha who guarded the entrance didn't recognize his father and stopped him. Enraged, Shiva cut off his head. Later, when he realized the truth, he brought Ganesha back to life by giving him an elephant's head.

This iconic brass statue depicts Lord Ganesha in one of his most popular aspects. His protruding belly is a characteristic feature evident in one his many names - Lambodar, meaning, the one with a large belly. His head is adorned with auspicious symbols of a trident and an Om. Note the decorative patterns on his trunk and the crown of his head.

This beautiful Ganesha figurine emphasizes his large elephantine ears. If you observe closely we find his Ekdant nature in one of his broken tusks. He's shown wearing only two ornaments, a Janev, the holy thread, and a necklace. In this representation he's shown sitting meditatively, holding a modak in his left hand while his right is blessing his devotees in Abhaya Mudra, to dispel the fear and obstacles in their paths.