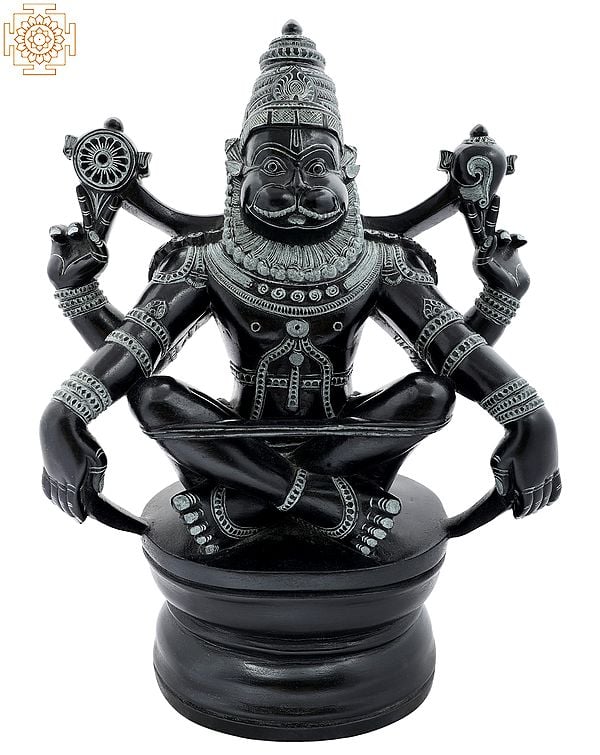 The Supreme Personality of Godhead appeared as Lord Narasimha, a Lila Avatara (Pastime Incarnation) in Satya Yuga, to protect His beloved five-year-old devotee, Prahlada from his atheistic father, Hiranyakashipu. The demoniac King received a special benediction from Lord Brahma that he could be killed neither by a man, a demigod, nor by any animal with any kind of weapons, neither during day nor at night, neither outside the house, nor inside the house, neither on the ground, nor in the sky. The Lord intelligently appeared from a stone pillar in the form of half-lion and half-man (Narahari Rupa), and killed him with His steel-chisels-like sharp nails on His own lap. By coming to save His little devotee from the demon, Shri Narasimha demonstrates that He is accessible even to a child, and removes all the obstacles on the path of bhakti of the one who truly takes shelter of Him. Thus, He is addressed as Bhakti-Vigna-Vinasana.

Here the Lord holds a meditative pose with His legs crossed. The front hands rest in a yogic mudra that denotes peace, while the right rear hand holds the ‘Sudarshan Chakra’ and the left hand holds a ‘conch shell’. It is believed that Lord Narasimha in this form taught Prahlada all the basics of Yoga. This form shows that He is the very personification of anger, yet the very emblem of gentleness. We must pray to the Lord to vanquish our demon like desires for sense gratification in this material world and to always keep us engaged in His devotional service.