The Magnificence Of Dakshinamurti Shiva 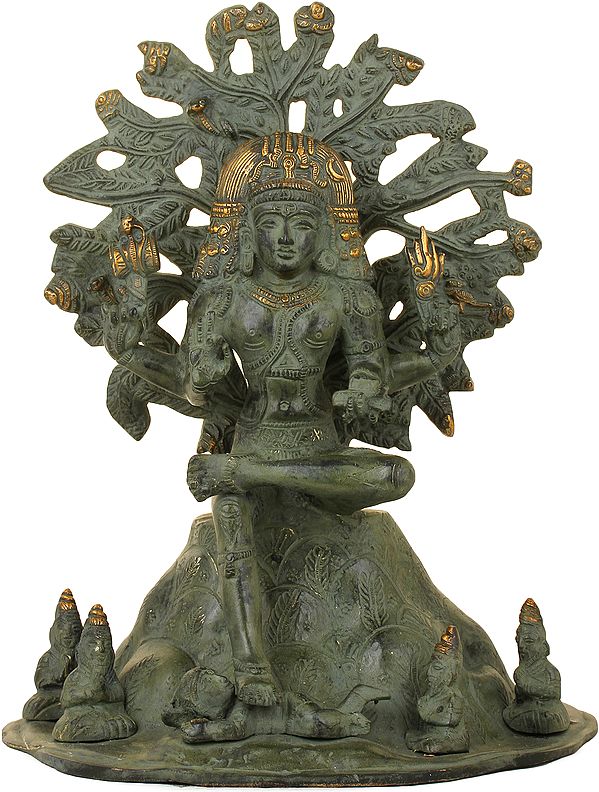 $324.00FREE Delivery
Bestseller
Amongst the Nataraja and the tandava pieces abound, the Daskhinamurti portrayal reveals a rare side of the Lord Shiva. On one of His Himalayan wanderings, Shiva was stopped by a group of wandering ascetics and beseeched to be their guru Himself. The kind and merciful Shiva agreed, and sat upon a mountaintop facing southwards. His newfound shishyas gathered round His feet with their hands in the namaskaram mudra, expressive of the deepest veneration. Thus emerged the Dakshinamurti roopa of the Lord, as could be seen on this page. An imitation of a rugged mountain is His asana, and from behind Him emerges a shock of wild mountain greenery. He has assumed lalitasana as is characteristic of Indian iconography. The posterior hands bear the damru (which produces the creative naad) and the flame (that destroys everything in its path), which is a representation of the dharmic cycle; while the anterior hands bear a pothi and the aahsirvaad mudra to complement His teaching.

It goes without saying that the Dakshinamurti roopa of the Lord is the most magnificent and awe-inspiring. The degree of skill and labour that have gone into this particular Daskhinamurti Shiva, as well as the finish variations chosen for it to be made available in, rightly convey the grandeur of His guruship. From the natural textures of the mountain to the musculature of the Lord, each aspect of this sculpture pours forth an aesthetics that is to be found only in the art of India. The shishyas with their gleaming crowns as well as the figure of ignorance that Shiva crushes with His feet are all carved with jsut the right proportion of detail. What distinguishes this from other Dakshinamurti compositions is the gorgeous headdress that frames His compassionate countenance and complements His shringar.