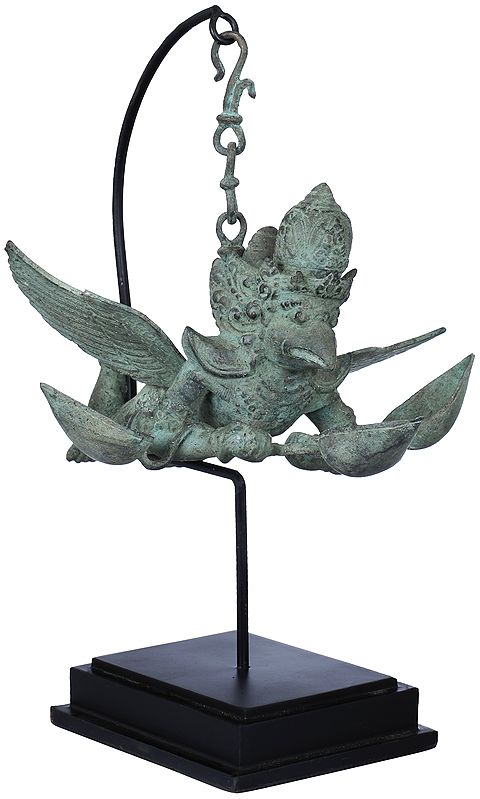 £371.25
An unusual iconography of Lord Garuda. As the vahana of Lord Vishnu, He is traditionally depicted in the stance of a man, but with aquiline characteristics; He is seated upon one knee and folds His hands in the anjali mudra, forming the very picture of reverence. The sculpture that you see on this page, however, depicts the son of Vinata in His independent glory. Caught mid-flight, He is on His way back from paraloka after having delivered a drink of amrta to the nagas, in return for which they released His mother from their captivity.

The powerful musculature of a supra-aquiline creature. The dynamic silhouette of His strong wings. The determined curvature of His beak; the keenness in His eyes. An engraved crown sits on His head, finished with engravings of traditional floral motifs. The trappings of a regal uniform are to be found across His broad shoulders and chest, protecting Him as He flies through the lokas. Any moment now there will be a chance encounter with Lord Vishnu, and a divine pact will follow.

Fashioned from pure brass, the Garuda sculpture that you see on this page is suspended by interlinked hooks of the same medium, which hangs from a wooden stand. The same features a smooth, dark, minimalistic finish that sets off the details prevailing in the iconography. On either side of Lord Garuda, hooked onto His forearms, and to the front of the figure, held in His hands, are three boat-shaped lamps. One may fill them with ghee and light them in the evenings as an acknowledgement of the glory of Garuda.