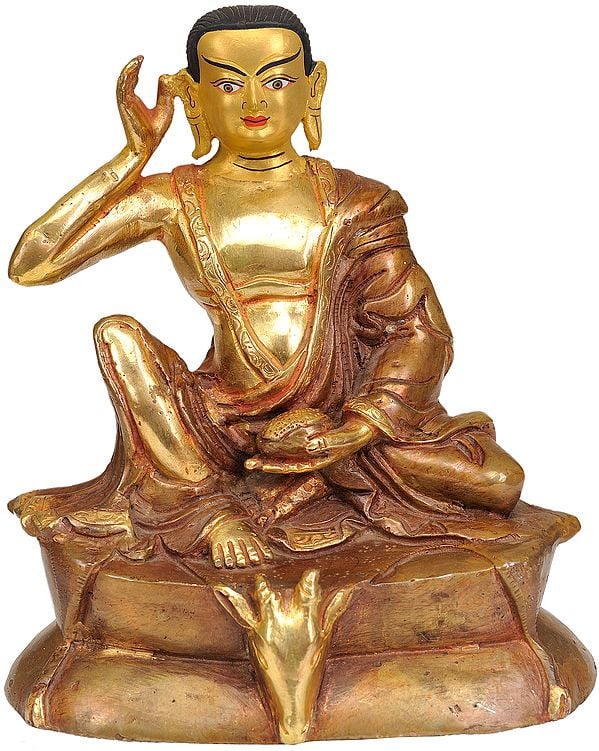 $295.00
Notify me when this item is available
Save to Wishlist Send as E-card Share by Email

A typical aspect of Milarepa's iconography is his slender, well-formed arms and legs and his boyish face, all of which are incongruously juxtaposed with the flaccid flesh below his breasts and his rotund belly. His right hand cups his ear, and the left is placed naturalistically in his lap. This is the most intriguing feature in the portrayals of Milarepa. In a general way, this gesture is appropriate for a Buddhist adept who is a shravaka, or listener. Specifically relevant to Milarepa is the fact that he was a master of the esoteric teachings of Tantra, which were only orally transferred from guru to disciple. This gesture, therefore, signifies Milarepa's capacity to retain those doctrines and teachings in his ear. As he himself said: "Unless the secret teachings be retained within one's ear, what gain is it to suffer sorrow?"

This sculpture is not merely a hieratic portrait of the most famous saint of Tibet, but it also has a narrative content. The stag in the forefront of the base of this statue embodies the following episode from Milarepa's life:

When Milarepa was living in a high mountain near the border between Nepal and Tibet, the serenity of his retreat was disturbed one day by the barking of a dog. It was a hunter's bitch on trail of a deer. On emerging from his cave, Milarepa noticed the frightened deer. Out of compassion, Milarepa sang a song for him. This proved to be much soothing to the deer. As the deer sat by Milarepa's side, the bitch approached and she too became docile on hearing Milarepa's sermon. Finally arrived the hunter as well, who, incensed at Milarepa, attempted to kill him with his bow and arrow. But the arrow missed Milarepa. Even after this had transpired, the compassionate and sympathetic Milarepa preached to the hunter as well and converted him. The reformed hunter came to be known as Cirarepa.