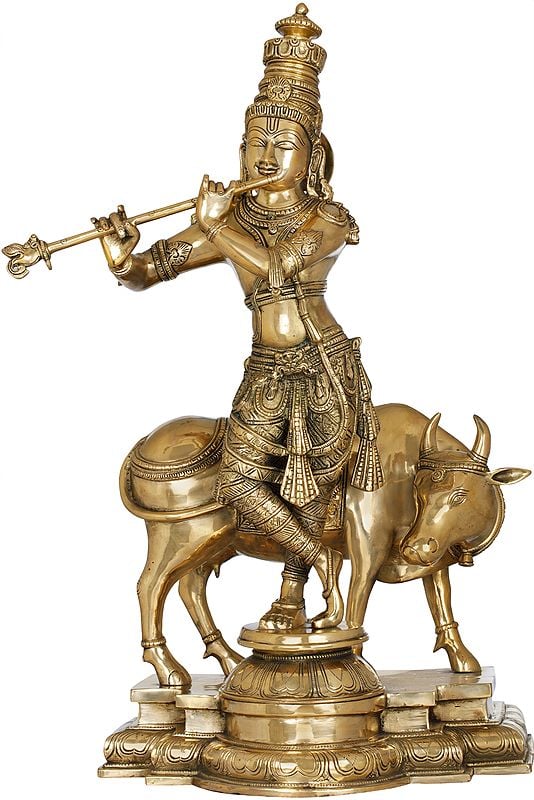 Godhead of Hindu trinity deities and the most popular incarnation of Lord Vishnu- Lord Krishna or Murlimanohar is the leader, hero, protector, teacher and a friend of all. He is the ruler, not only of religion and philosophy, but also mysticism, literature and all aspects of Indian folklore.

Here he stands on a flourishly carved multilayered leveled-up inverted lotus in his run-of-the-mill cross-legged posture and plays the signatory melodious flute. Krishna and cow hold an ancient devotional relationship, as Krishna was a cowherd or a Gopala since childhood, which means the protector of the cows. The sacred cow seen in this sculpture behind Krishna is his loving ‘Surabhi’, whom he created from the left side of his body.

Krishna adorns a luxurious ankle-lengthed dhoti with horizontal patterns and carved designs that highlight its grace; the stylized kamarband hangs along in a beauteous manner with the sleek stole crossing over the bodily curvatures. The most unique part of this Murlimanohar sculpture is the way of the haloed crown- long and inspired by South Indian temple carvings in circular multi layers with a gumbad-like conical top.

The lotus eyes, sweet smile on this beautiful face and the major ornamental carvings all over his body emphasize his supreme divinity and friendly leadership.