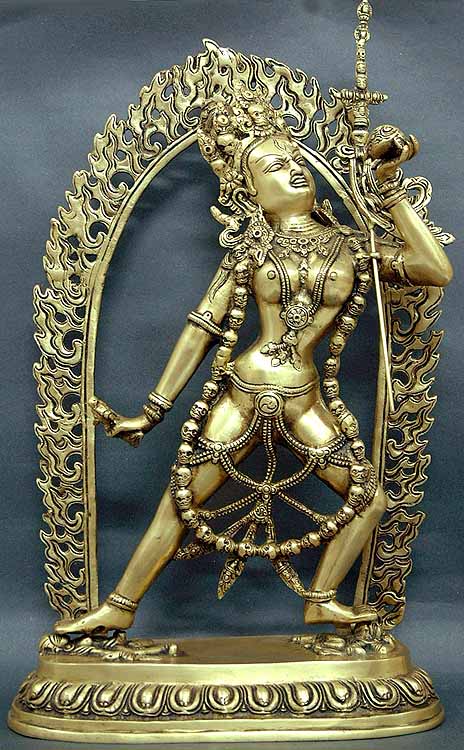 $295.00
Notify me when this item is available
Save to Wishlist Send as E-card Share by Email

This image is that of dakini Vajrayogini. A dakini is the most important female principle in Tantric Buddhism, representing the ever-changing flow of female energy. They are the guardians of teachings and are considered the supreme embodiments of wisdom. The dakini can help change human weaknesses into wisdom and understanding, and the concept of self into enlightened energy.

There are two kinds of dakinis-supramundane or "beyond worldly," and mundane, or "worldly," ones. The second are usually referred to as yoginis. Yoginis are mystical partners of yogis, to whom they give secret wisdom and magical powers. In fact to reach Buddhahood, the practitioner (yogi) requires the help of the following three:

2). His yidam, or meditational deity, and

It is according to the sadhana written by Naropa that the present statue is sculpted. Her face is semiwrathful. She has three eyes, and her mouth is open. Her crown is made up of five dried human heads. Her right hand holds a chopper pointing downward. Her left hand holds a skullcup filled with swirling human brains inside. Under her bent left hand there is a khatvanga, a staff decorated with human skulls, vajra, scarf etc. Her naked body glistens with her vehement passion. She is very youthful-looking, and has a beautiful shape with large, pointed breasts and firm nipples. Her necklace is made up of dried human skulls, and she is wearing bone ornaments on her arms and feet, and also a bone apron on her body. She is crushing under her outstretched left leg Dushenma, lying face up. Her bent left leg is stepping on Bhairava, who lies face down. A large fire halo representing wisdom is behind her.

Dance of the Yogini: Images of Aggression in Tantric Buddhism (Article)