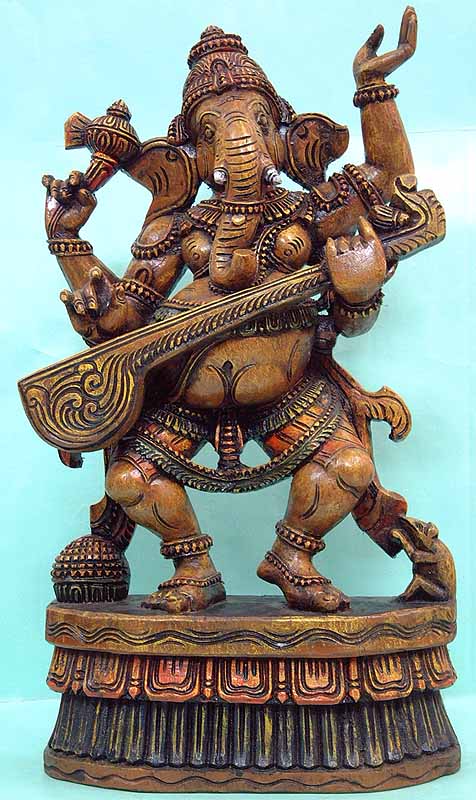 $650.00FREE Delivery
This item can be backordered
Time required to recreate this artwork
20 to 24 weeks
Advance to be paid now
$130.00 (20%)
Balance to be paid once product is ready
$520.00
Notify me when this item is available
This magnificent statue carved out of vangai wood manifests a rapt Lord Ganesha engaged in ecstatic dance and loud song. Ganapati, a deity of masses, tribes and folks, has been represented here in his 'lokagayaka' and 'lokanartaka' form. In Indian mythology Lord Ganesha is invoked by over a thousand names and epithets and each has its own form but sometimes it seems that the innovated forms are not so many as are the manifestations of the elephant headed god. Not only in modern times but even his early representations were multitudinous. Sometimes varied his forms, but sometimes varied only his postures, complexion and attributes.To the illiterate tribes of Chhattisgarh, Orissa and Maharashtra Ganesha read out Mahabharata, Ramayana or Bhagwata Purana and to the jubilant masses chanting 'Ganapati Bappa Morya' he staged 'Tamasha', sang a song, played a lute and performed 'Bhangada'. This wood-piece represents him as dancing, singing and playing on his 'vina'.

Ganesha in dancing posture is one of the most popular and the earliest iconographic manifestations. Lands and traditions effected variations in his dancing postures, but despite his dance forms have always been closer to 'Lasya' rather than to 'Tandava'. Even in great ecstasy and rapture or even in exuberance he is not rompous or rowdy. A slightly tilted head, a little raised legs, minor body curves, tenderly moved arms and over and above all a kind of divine sublimity define the dance form of the loving god. Shiva danced to create or destroy, Kali for suppressing and eliminating evil and Krishna for subduing wrong but the secular god Ganesha danced for aesthetic delight. In this representation the intrinsic rhythm bursting out powerfully and yet effortless, a few curves of his figure and the rapture reflecting on his face are used to define his dance.

Lord's upper left hand is raised in 'Alapa'. He seems to be modulating his voice on a high pitch. He is singing a ballad or a song of victory and it seems a large crowd has gathered round the village 'chaupal' for hearing him. He is supporting his song by his 'vina' which he himself is playing. The movement of fingers on 'vina' seems to strike its strings and create music. For the time being the Lord has put off his attributes, 'pustaka', 'laddu', rosary, noose etc. He is carrying just a battle axe to perhaps ward off evil and protect weak and poor as these are his prime obligations. He is wearing various ornaments upon his neck, arms, wrists, ankles, feet and around his waist. He is in loin cloth which is tied on his waist with a lavish girdle. In dance his sash seems to have descended on to his thighs and its ends are trailing to ground where on both sides they create alongwith the container of 'modakas' and deity's vehicle mouse an arch-like base to support the image of the deity.