Nataraja in a Stylized Ring of Flames 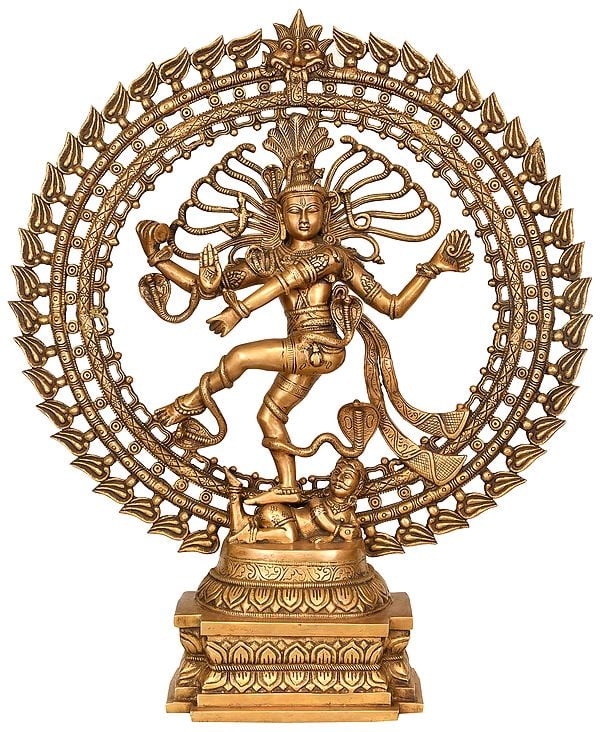 The Hindu god Shiva as a divine dancer is depicted in the form of Nataraja, performing the ferocious dance of Tandava. He is the most knowledgeable and combines his image as a creator, preserver and destroyer of the universe highlighting the conception of never-ending cycle of time. He stands on the dwarfish demon Apasmara, an embodiment of illusion which leads to mankind astray. The multi-layered and heighted lotus pedestal is carved here in a unique structure and an alluring perfection.

Nataraja is surrounded in a cosmic Kirtimukha ring of flames, sculpted in multiple circles of exquisite carvings; innermost formed in lotus petals along with a boundary of spiral circles; look at the outermost edge circled by the cosmic fires of destruction. What makes this statue striking from others is the sharp features of Lord Shiva and baby demon lying down; the pointed nose, vigilant eyes, perfect lip shape and smooth texture enhances the beauty of this one of a kind sculpture.

He is garbed in a short dhoti and a stylized kamarband that has its ends hanging down on the left. Chaturbhuja has his anterior hands formed in the iconic mudra and rear hands hold the cosmic fire and damru respectively, depicting him as the supreme controller. Strands of hair coming out from the stylized matted hairs represents his ferociousness and extreme power; lavish ornamentation personify his greatness and royalty. Zoom in to have a look on how Shiva’s every body part is coiled by the deadly serpents, depicting his control over death.