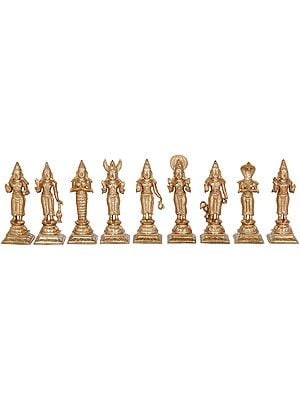 Navagrahas are the nine celestial bodies of the universe representing Sun, Moon, Mars, Mercury, Jupiter, Venus, Saturn and two lunar nodes in the form of deities. These grahas hold the greatest astrological significance and influence human life and history by eliminating all flaws and doshas present in birth horoscope; worshipped in Hinduism on a large extent and the initial seven are named after the planets in solar system and correspond with the names of seven days in the week of the Hindi calendar.

These panchaloha statues are housed in separate mandapa (small pavilion) so that no two of them can face each other. They are always set up in a proper zodiacal circle when placing or constructing and are shown here in astonished crowns and jewels.

Surya (sun) is placed in the centre and holds lotuses in each of the two hands with a powerful and recognizable sun like aureole. He is the lord of the planets or the grahapati; Soma or Chandra (moon) holds two white lotuses in each hand and depicts waxing and waning qualities. Here he is shown with an identifiable moon crown; Mangala or Kuja (mars) is the ferocious god and carries a lotus and a mace (gada) in his hands; Budha (mercury) carries his wielding weapon in the right hand and left is in a gesture of blessing; Brihaspati (Jupiter) is the guru and is praised in many hymns in Rigveda. He holds a book in his right hand representing all the branches of knowledge, and left is in a gesture of blessing.

Sukra (venus) is the teacher of the demons and holds a water pot in the left hand and a rosary in the right. He is also the author of sukraniti; Sani (saturn) is the turbulent and troublesome god who makes and breaks fortunes by his position and influence. He rides a vulture, which is shown behind him in the sculpture and is especially worshipped by those who believe in Hindu astrology; Rahu and Ketu are the ascending and descending nodes of the moon. Rahu only has a face of a serpent and Ketu has the serpent’s tail. They stand here with their hands joined in namaskara mudra.