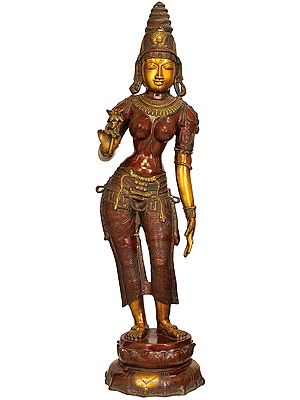 The holy Mother Goddess in Hinduism, Parvati is the gentle and nurturing form of the supreme Goddess Adi Parashakti and the consort of the destroyer of Trinity, Lord Shiva. This brass statue of the Goddess depicts her as standing in a slight bent posture on a double lotus plinth; carved with smooth edges and petals chiselled beautifully. The dual shade of gold and brown complements with the elegant figurine of Goddess Parvati. She is carved here with a fully blooming lotus in her right hand, hence named as Padmadharini (one holding a lotus). The body curves and sharp facial expressions indicate the sculptor’s marvellous skills of perfection.

Zoom in to the image for a clear view of the slender legs of Parvati veiled by a richly carved ankle length dhoti having horizontal patterns chiselled in designs of luxury and ethnic patterns. The multiple layered kamarband is ornated with small and sleek golden colored brochs that contrast with her gold neck choker and the royal gold hued body. The perfectly fitted vest that shapes beautifully along the chest and the floral carved sleeves are indicative of the carver’s precision for his work.

Goddess Parvati is sculpted with the smiling lips, sharp pointed and sleek nose and a bindi on her forehead reflecting her feminist aura. The long multiple layered crown that she adorns is inspired by the South Indian style temple carvings, filled with intricate patterns and precised carves. Inspite of its amazing and creative carvings, the super glossy texture catches the attention of the eyes.

Usually ships in 10 days
Notify me when this item is available
Devi Parvati, possessed of (‘dharini’) a lotus (‘padma’). Possessed of the beauty of a lotus and the sattvik calm of its nature. The lotus flower grows in stagnant waters, untouched by the excesses that surround it; and just like the lotus, Devi Parvati shines forth amongst the venerable Hindu Devi pantheon. The standing murti of Her that you see on this page captures the perfection of Her form and the intelligence of Her stance. Upon a double-tiered lotus pedestal She stands, a miniature bloom betwixt the fingers of Her right hand. This She raises to Her side as if making an offering to Her husband, Lord Shiva.

The tall, lissome Devi looks straight ahead of Her. Upon Her handsomely carved, wide-set brow sits a tall, tapering crown, the glamour of which bears striking resemblance to the ancient templetops of the South. The kundalas dangling from Her karna touch the ample gold pieces that clasp Her neck, which further makes way for a pair of luscious breasts, a small waist, and full hips. A silken dhoti clings tightly to Her long limbs, held around Her hips with a girdle of gold; the embroidery on the same having been carved with superb skill and attention to detail.

A colour palette of predominant browns, strategically interspersed with a deep gold across the mukhamadala (countenance) and the insides of Her lithe arms; a form that pours forth with fecundity and fitness and youth.