Padmasana Buddha In Bhumisparsha Mudra, His Divine Countenance Impossible To Look Away From 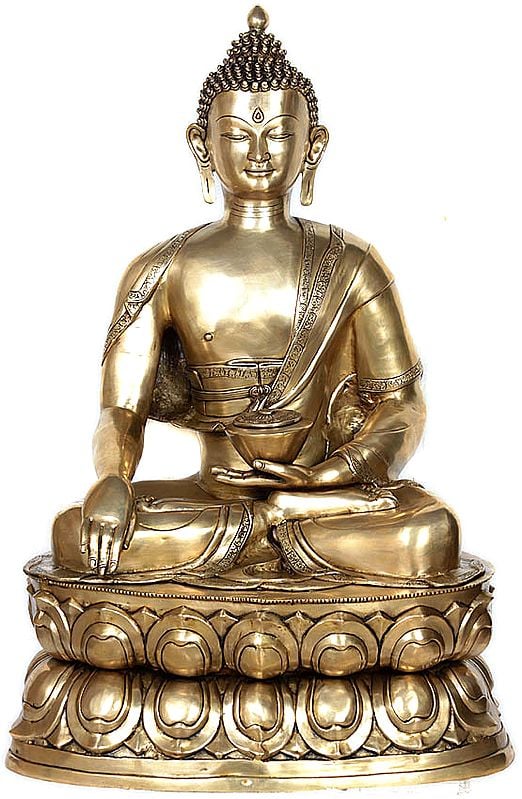 £1571.25
The Buddha is the fountainhead of inspiration for spiritual artisans across the subcontinent. His meditating figure is to be found in abundance in the art made across its length and breadth. The bhumisparsha mudra is by far the most popular of the mudras chosen by artisans. In Sanskrit, 'bhumi' means 'earth' and 'sparsha', 'touch' - it is the mudra assumed by the Buddha on the verge of His Enlightenment, invoking the earth to bear witness to that moment. The tips of the fingers of His right hand touch the earth on which He sits in a flawless padmasana, while the other hand bears the characteristic almsbowl. In this composition, He is seated on a double-tiered pedestal engraved with lotus petals, a symbol of compassion, which is a primary tenet of Buddhism.

The Buddha scultpures you see in our collection are each handpicked for the inimitable finish, which is a function of not only the skill but also the devotion with which the artisan made it. This larger-than-life portrayal of the former Shakyamuni is no exception. He wears the long, loose robes of the ascetic that covers His shoulders, partially His torso, and the rest of Him downwards. One cannot bring oneself to look away from His gracious countenance - the composure of satchidananda, the smooth features framed by the lengthened earlobes. It has taken an eye-watering proportion of labour to bring about such perfection, which is best appreciated by zooming in on different zones of the sculpture.

This item can be backordered
Time required to recreate this artwork
4 to 5 weeks
Advance to be paid now
£314.25 (20%)
Balance to be paid once product is ready
£1257.00
Notify me when this item is available
Save to Wishlist Send as E-card Share by Email
Free Shipping. Delivered by