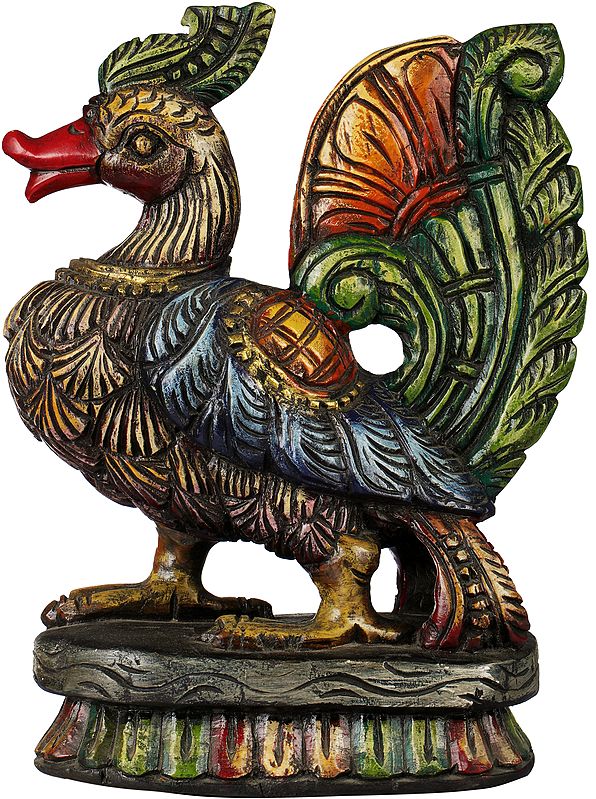 $117.75$157.00  [ 25% off ]
From Krishna's feather to Lakshmi's charm, Mayura or peacock is considered a sacred animal in the Hindu religion. It is known not only for its depiction of eloquence but its kind nature as well, creating a strong connection with the deities picturing their essence. According to Hindu religious belief, it was created from a mythological bird, Garuda's feathers. This was the same majestic bird that carried Lord Vishnu on its back.

Here, the beauty and craft reaches the next level with our exotic ornamental peacock as the hue of blue and green blend in with the remarkably carved sculpture made of the finest south Indian temple wood not only complimenting your house decorations but soothing your soul.

The peacock is also held in high esteem as it is the mount of Ganesha and is also associated with Saraswati, who is considered the deity of benevolence, patience, kindness, compassion and knowledge. Moreover, it is deemed to be a lucky charm as according to people's belief it brings wealth and prosperity with its presence in the household. It is also believed to promote mental health as it calms a person from within. It is further emphasised in the culture as it is said that Lord Indra once turned himself into a peacock. This sculpture not only freshens your mind but strengthens you faith as well