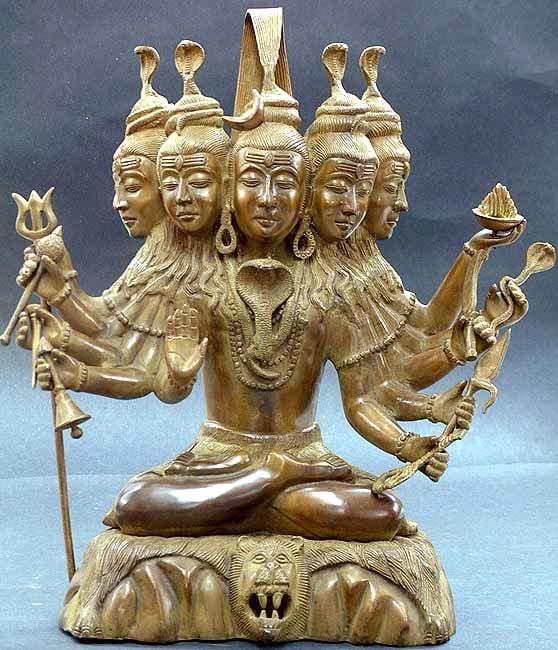 Sadashiva is the superior form of Shiva. This rupa depicts Shiva as the omnipotent and subtle personality. Here, Shiva is showering his blessings upon the fallen souls with having five faces and ten hands.

As Lord Ram, Krishna or Hari is the source of all the sources. Thus, it is mentioned in the ‘Brahma-Vaivarta’ Purana that the Panchmukhi Shiva (Five Headed) has emerged from the divine supreme personality of Godhead Shri Krishna. So, as he has been emerged from the all attractive, he too also holds the attributes of magnetism in him.

In the sculpture, the transcendental Shiva resides on a lion's skin placed over a rock while he holds his sacred implements; trishula, axe, katvang, damru , rudraksh and other ayudhas as well. He has adorned a lot of Rudrakshs in the form of ornaments and along with that his hairs are wide spread in which a crescent moon is placed on the front main head and Devi Ganga flowing through the jata. Tthe jatas of the other four heads are there with cobras tied on them, we can also see a large naag on Lord's chest as well.

Sadashiva with the Bhairavis Rudra and Annapoorna