The Splendour Of Lord Ganesha, Seated Under A Kirtimukha Aureole 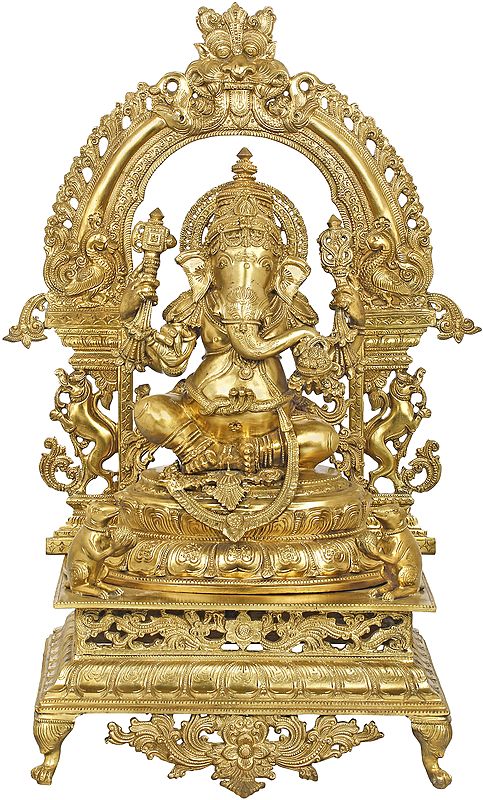 $2995.00
This bronze Lord Ganapati sculpture from Bangalore doubles as a temple. The adorable boy-deity is seated in a half-hearted bhadrasana, with a snake-tie holding His chubby belly in place and His four arms bearing the usual lotuses and laddoos and a piece of His own tusk. The central figure of the Lord has an iconography that is replete yet unconventional - delicate, embossed ears and an intricately tattooed trunk.

Behind Him is an aureole that matches the glory of the son of Lord Shiva. He is flanked by a pair of outward-facing Yali-pillars. Atop those pillars are perched a pair of inward-facing peacocks that seem to be gazing on the Lord with love and reverence. The aureole curves upwards from the peacock motifs and culminates at the highest point of the composition in a Kirtimukham. A popular, auspicious motif in Indian art, the Kirtimukham in this one is large, sculpted with generous attention to detail, and as eye-catching as the central icon itself.

The high pedestal may be a standalone work of art. The Lord’s asana is a shallow disc atop two gigantic rings of lotus petals. At the foot of those petals are a couple of mice, each offering to Him a laddoo. The lotus pedestal is propped up on a wide stool engraved with more lotus petals and featuring a panel of thick vine latticework. With this Bangalore bronze, you buy not only a murti but also a mandir.