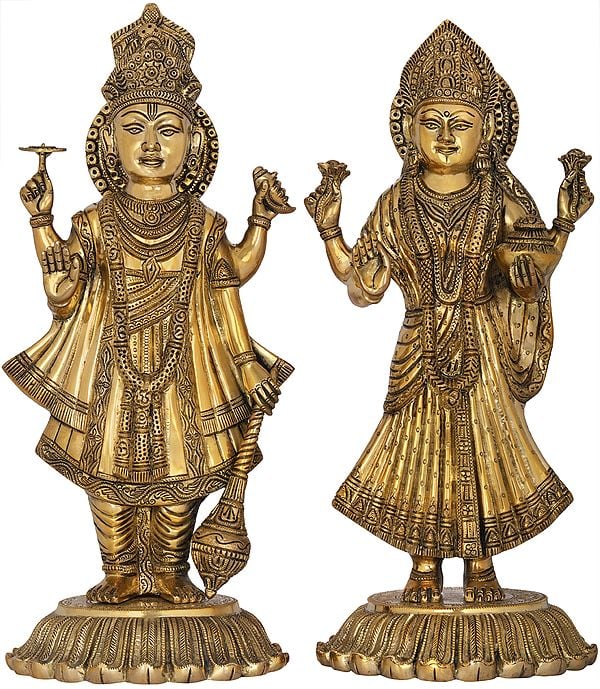 $870.00
The divine couple of the paraloka (otherwordly realm of existence; equivalent to the Abrahamaic heavens), Lord Vishnu and Devi Lakshmi are a widely revered ensemble. It is from Him that the existential matrix has emerged and it is by Him that it is sustained; He is the preserver deity of the Hindu trinity, which comprises Lord Brahma, the creator, and Lord Shiva, the annihilator. His wife, the gorgeous Devi Lakshmi, is the presiding deity over wealth and resources, things that are indispensable to the process of preservation.

The twin sculpture that you see on this page depicts the two standing next to each other on identical lotus pedestals. The respective silhouette of each deity is slightly differentiated, but largely congruent. Together, these make up the traditional Vaishnava iconography of Gujarat. The flared attire, the angular crowns, and the simplistic upturned pedestals resemble the region’s folk art and fashion, which find reflection in devotional art.

The scale of the sculpture is compact, while not miniscule. Each detail on each figure has been executed with remarkable precision, such as the layers of shringar cascading down their torsos, the pleats of their silken clothing, and the slender digits of their hands and feet. Note the lifelike stance of their hands, the grip around His conch and discus and Her lotuses and pot of plenty.