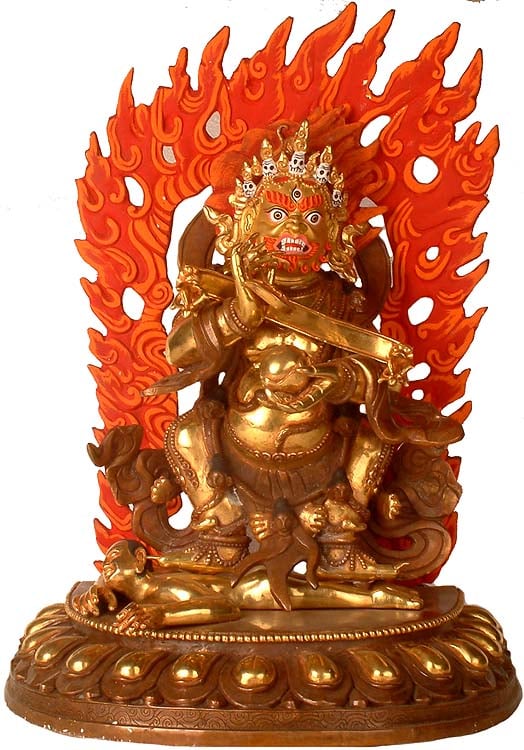 $795.00
Notify me when this item is available
Save to Wishlist Send as E-card Share by Email
The wrathful deity Mahakala shares a special relationship with Buddhist monasteries (viharas). Thus developed in the canons of Tibetan Buddhist aesthetics, a unique form of Mahakala, known as Gur gyi mGon po, or the 'Great Lord of the Pavilion,' celebrating his status as the protector of Buddhist viharas.

Grinning wildly and with fiery eyes, this terrible image of the Great Black One stands heavily upon the body of an ecstatic corpse. While he holds the normal skull cup and chopper in his two hands, supported across the crook of his elbows is an ornamental stick, called the 'gandi' gong, which is used in Buddhist monasteries to summon the monks and nuns to assemblies. It is this intriguing aspect of his iconography which associates him exclusively with the viharas and it is believed to symbolize the vow he once made to the Buddha to protect the monastic community of Nalanda at Bihar and hence by extension all Buddhist retreats. Also, originally it was likely a shaman's staff used during application of protective charms (panjara), hence in this manifestation he also came to be known as Panjaranatha, or 'Lord of Charms." It is also conjectured that the rod denotes the one used to hold up outdoor tents and hence is a reminder that this awesome deity is the supreme savior of the essentially nomadic Tibetan people.

The significance vested with this stick can be realized from the fact that it is also called the 'gandi stick of emanation,' and it is believed that all of Mahakala's other forms emanate from this rod. The Panjaranatha form can thus be thought of as the fundamental or original form of Mahakala, being the source of all the other manifestations, including the four- and six-armed incarnations.

A peculiarity of this deity is that he is depicted with his knees bent, almost seated on his haunches, as if about to rise. This posture is defined in the Sadhanamala; Mahakala is said to be rising from the body of the ghost (pretasanastham utthitham) on which he was seated in yogic meditation. Also, his physical form is dwarfish (vamana) and often squat, adding to the grotesqueness of the visualization. The short stature shows that Mahakala possesses a compact power.

The jewelry worn so elegantly on his chubby body and gigantic head includes a gold crown, necklaces, earrings, and anklets. A garland of severed heads and snakes and the chalk white five-skull crown complement the ornaments and his glowing eyeballs and gleaming teeth. Each of these five skulls specifically symbolizes the conquest of a particular type of obstruction of enlightenment. Mahakala takes a terrific form and conquers the most horrible realms of existence. As a fierce manifestation of Avalokiteshvara, the Bodhisattva of Compassion, Mahakala helps beings overcome all negative elements, especially spiritual ones, personified and symbolized by the panoply of fearsome creatures over which he becomes lord. He wears his grisly ornaments to show his indefatigable determination to redeem even the horrible.

Panjaranatha is the preserver of the Sakya order.