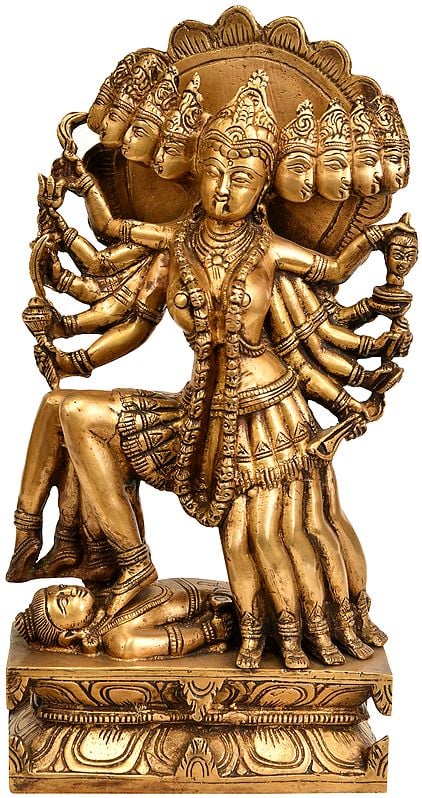 This sculpture of Goddess Kali in her ten heads is a form of Mahakali. She represents the goddess of great time, death or conversion. She is a terrific deity who has a fierce expression on her face and can bring destruction to the ongoing evils. She is known as female prakriti (world). Kali in this form is also known as Dashamukhi (ten headed) and Dasa Mahavidya Mahakali. She represents the ten Mahavidyas or the great goddesses. She is a mother, who is a destructor as well as the creator. She is the wife of mahakal (Shiva).

Mahakali is proclaimed as having ten heads, ten arms and ten legs. In each of her ten arms she is carrying ten different implements like, sword to symbolize power, a severed head to reflect ego, Trishul (trident) to communicate the power to control all the phases of time (past, present and future), tray to collect the blood of dead, etc. All are an identifying ritual symbol or weapon of a particular deity. She is an embodiment of Shakti (power of creation) and controls various gods’ potentials with her strength and wisdom. She is seen standing on her husband, Shiva’s dead body. Shiva represents consciousness which is inactive. It is said that without Shakti, consciousness (Shiva) is inert. Shiva is shava without Shakti. Mahakali is wearing a garland of severed heads, mostly 50 in number implying the Sanskrit alphabets and their sounds from where the entire creation started. She is wearing an apron of human hands as a token of her happiness to the great works of kind humans. The divine aureole at the back is spreading its rays like the bright sun. Tongue lolling out as a mark of shame for keeping her leg on his husband’s chest. The beautiful necklace, kundals, bracelet and anklet adorning her body are augmenting her grace.

This is a rare form of Kali, personifying vehemence as well as spirituality together.