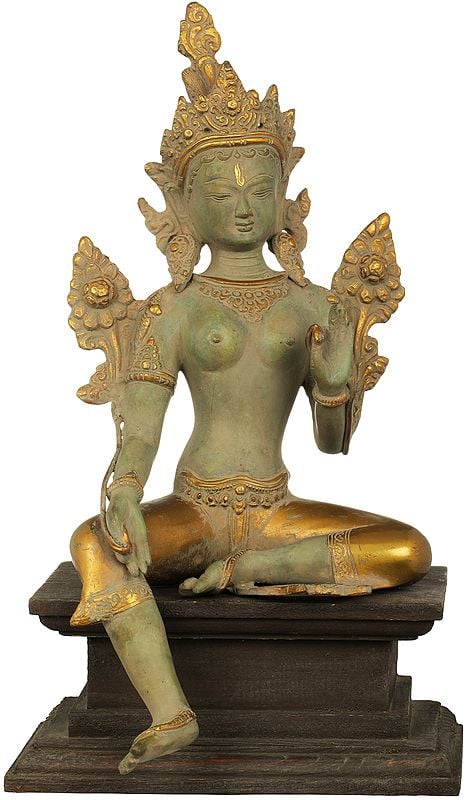 $325.00FREE Delivery
The most relatable of the bodhisattvas, yet fathomless; familiar, yet beyond comprehension. Formed from jade-green moonlight, Tara steps down from the realm of Enlightenment and extends Her helping hand to us mortals. She is Enlightenment itself in a form that we find beauteous and approachable. Limbs that are sturdy and shapely, the straight and lissome torso of the yogini, and a countenance that conveys great ananda (Bliss) - all these have been captured in breathtaking detail in the rugged brass sculpture you see on this page. Her hands are in the abhaya mudra (gesture of fearlessness; right) and varada mudra (gesture of blessing; left), respectively, while the the stem of a lotus each are entwined in Her finely formed fingers.

Finished in earthy green interspersed with hints of gold, like in Her crown and shringar and raiment, one may perceive in this work an anima figure (for men), a role model (for women), and a Devi (for both). However, the Green Tara is after all indefinable; ungraspable as She is, She is none of, and more than, these things. Her transcendental compassion could be gleaned from the beauty and tenderness writ on the features of Her face, which is replete with the golden glimmer of the third eye, framed by a superbly crafted crown and kundalas that graze Her shoulders. What sets this Green Tara apart from the usual bodhisattva sculptures is the wooden pedestal that She is seated on in deep dhyana. The dark finish and the multiple tiers lend to the composition a world of elegance.