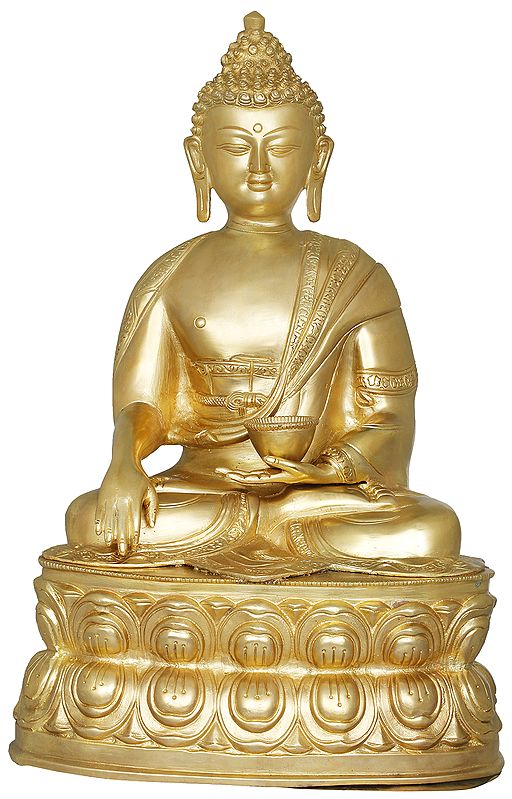 Moulded in its most beauteous patterns with all the lines connecting together to form accurate structure of this statue of lord Buddha; sculpted in the best quality brass with a glossy touch and a superfine smooth texture. Buddha is the founder of Buddhism, as his act of fulfilling his ultimate goal of achieving enlightenment. He sits here on a heighted double lotus pedestal engraved in triple layered petals along with the decorative lines on each leaf. As you gaze at his royal robe, you will be mesmerized by the ease at which it flows and veils his body in the usual drape of bare chest visible on the right. The most alluring part of this robe is the thin border having haphazard yet beautiful patterns scribbled on it and its plain silk texture that makes it warm and royal.

Gautama Buddha holds a stylized bowl in his left hand, known as the begging bowl or an alms bowl, used to collect rice or other food items, it also holds the significance of being a barrier between necessity and luxury. The right hand is in the Bhumisparsha mudra (touching the earth) as a symbol of inviting earth to witness his journey of enlightenment. Carved in elegant and realistic features of a sharp pointed nose, long earlobes, thick eyebrows and matted coiled hairs highlighting his years of intense meditation. This Buddha sculpture mesmerizes the viewers by its divine aura and elegant charm.