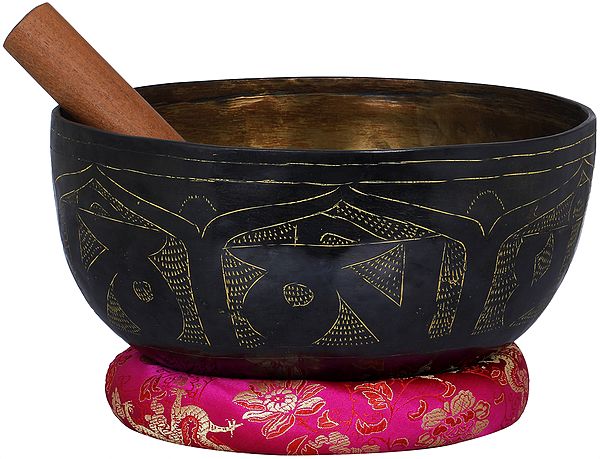 $130.00
FREE Delivery
In the course of history, music is the greatest creation of mankind in the purest form. It helps in improving your mind vigorously by making it more artistic and ingenious. No matter, what the great invention is, it requires art, creativity, and imagination that is fulfilled by music. The Buddhist singing bowl plays the dual role of a musical instrument as well as the singer itself. Also known as the Standing bell or resting bell is an inverted bell, supported from below with the rim uppermost. Such bells are normally bowl-shaped, and exist in a wide range of sizes,.Singing bowls—may be played by rotating a mallet around the outside rim or by striking to produce a sustained musical note. singing bowls are used in some Buddhist religious practices such as Meditation and chanting.

This alluring matted black singing bowl finely cast & wonderfully finished in sacred Bronze, carved in golden artistic designs, decorated with inscriptions of the message of goodwill, decorative motifs such as rings, stars, dots or leaves, prominent Tibetan mantras & symbols in Tibetan script. To play the singing bowl, there is a beautifully finished striker, known as the mallet made with a ‘soft strike technique’ involving fine quality wood wrapped with a colored soft felt of proper density covered on its one end for striking.

The bowl is securely placed atop an appropriate sized vibrant orange colored o-ring shaped cushion prepared to help prevent the bowl from falling or slipping around and allow the rim to vibrate freely for an excellent tone quality. It's a wonderful gift amongst your music therapists, sound healers and yoga practitioners friends