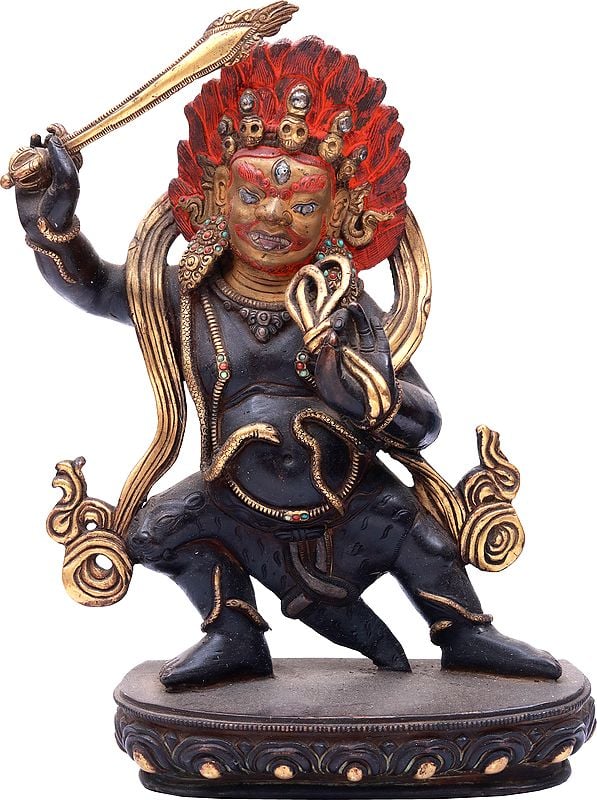 $499
FREE Delivery
These deities are the fierce guardians of the Dharma and faithful defenders of Buddha. They exemplifly the transformation of the disciple, transmuting aggressiveness and violence into the forces of positiveness. That appearances can be deceiving and things often are not as they seem to be. This is doubly true of the wrathful Buddhist deities. They are terrifying in appearance, bare sharp tusks-teeth, glaring from various angry eyes, wearing crown of skulls and dance on human bodies.

This copper made breathtaking statue of Yamantaka, the 'Lord of Death '- an ambivalent ferocious deity in Vajrayana Buddhism, whose physical appearance is revealing: with a powerful black warrior's body, a leaping tongue in-between the protruding teeth and bulging eyes, extra large ears. wearing a five- skulled (khopdis) red crown, he is riding on the buffalo holding the khadaga in one hand and a very long and powerful pasha( knotted loop ) depicted in 2-3 bounds in second hand. It is a soft weapon representing the power of the deity to capture and bind evil and other obstacles. He symbolises the strength that destroys the illusion which hinders the attainment of enlightenment. Yamantaka is a violent aspect of the Bodhisattva, who assumed this form to Vanquish Yama.

Having wrapped a fierce snake over- the neck – to - stomach and baby snakes as bangles & kadas on hands and legs, he is also wearing a finely carved big haar landing on stomach embedded with some colourful gemstones. They are the teachers and protectors. Their monstrous looks are intended to frighten forces engaged in evil practices. They illustrate that the poisonous energy of negative emotions can be transformed into a positive purifying energy. A person who runs from them in fear is reborn in one of the lower realms. Let the statue speak of its princely artwork to you.

This item can be backordered
Time required to recreate this artwork
4 to 5 weeks
Advance to be paid now
$99.80 (20%)
Balance to be paid once product is ready
$399.20
Notify me when this item is available
Add a review
Have A Question