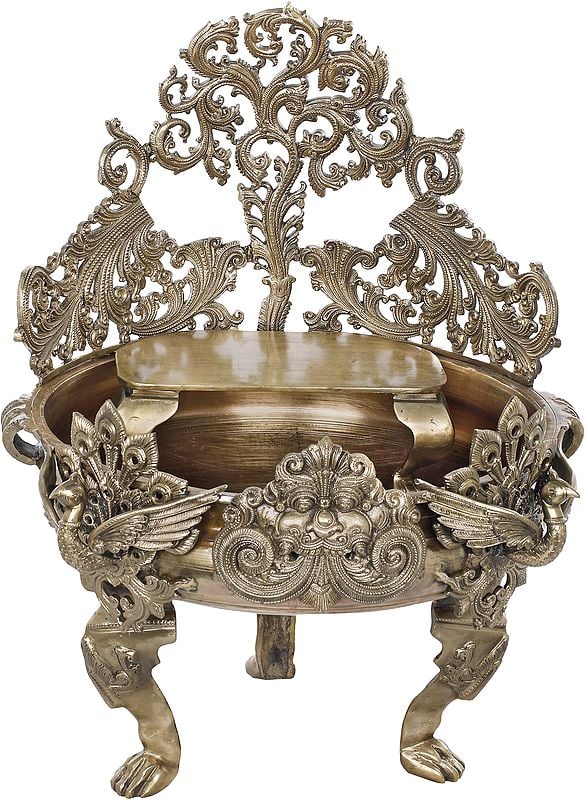 $1795.00
The urli is a traditional Indian home decor element. It comprises a wide-rimmed shallow-bottomed vessel, designed to be filled with water, on which are floated a layer of freshly plucked flowers. The scents of the flowers interact with the moisture to perfume the surrounding air. It is a simple and effective arrangement that is as pleasing to the eye as it is to the nose. The urli that you see on this page is a particularly ornate number.

It is a substantial composition, large and heavyweight. It is tri-legged, each of them sculpted to resemble the lifelike limbs of a terrestrial animal. From the base of each leg emerges a network of vines, which then transforms to the open plumage of a peacock. The breast of the peacock juts frontally outwards from the body of the urli. Each of the peacocks is carved with a great deal of detail and symmetry, despite their being an ancillary element of the composition. The bronze medium and the Kirtimukham motif on the midline are hallmarks of Southern workmanship. Note the pair of thick handles on either side for ease of being moved around.

The most distinguishing aspect of this urli is the chowki designed to fit into the vessel. The urli doubles as an unusual, open and sweet-smelling altar for the deity of your choice, whose murti could be placed upon the same (it is in itself 5.10” tall, with the surface area measuring 12.50” by 6.00”). To the back is a tree-of-life motif, flanked by vines defined by a similarly curvaceous silhouette. This would serve as an aureole for the deity that you place on the chowki.