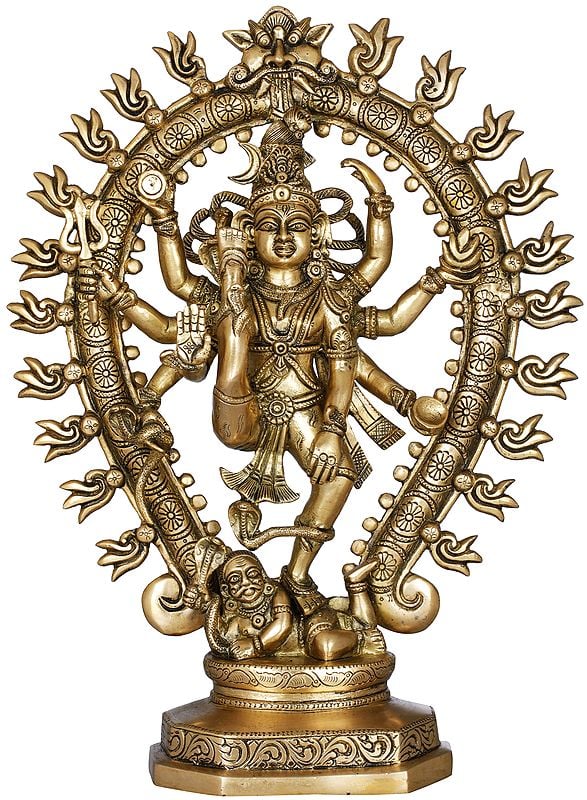 This sculpture represents Shiva’s wild form of Urdhava Tandava, with one leg artfully raised above his head and one left hand majestically over his head. Once goddess Kali, the patron of Thillai forest challenged lord Shiva for a dance contest on a condition that the loser had to leave the forest. The contest was judged by lord Vishnu and it went on for hours on equal level, so to win the battle, Shiva performed this posture of leg lifted over his head in the Ananda Thandavam; Kali being a respectable woman, denied to go into this compromising position and accepted her defeat. The tranquil slight smile and passive gestures on his face represent his inner joy of winning the contest.

The demon dwarf who lies on this unique multilayered carved pedestal personifies ignorance and Shiva dancing on him is symbolic of destruction of all ignorances from the world. Eight armed Shiva holds his symbolic weapons of trishula, drum, fire, snake and a cup with the primary right hand in abhaya mudra. He is enclosed within a fiery Kirtimukha arch or a prabhamandala that is carved in utmost perfection and beauty.

Shiva, the Supreme Being is surrounded by snakes all around- in his hand, around his neck and other tied on his legs and arms signifying his power to suppress death (snake symbolizes death). Ganga flows out from his matted locks with rope-like strands that peep from behind; garbed in perfect garments; Shiva’s Urdhava Tandava is the most unique and difficult postures to be initiated.