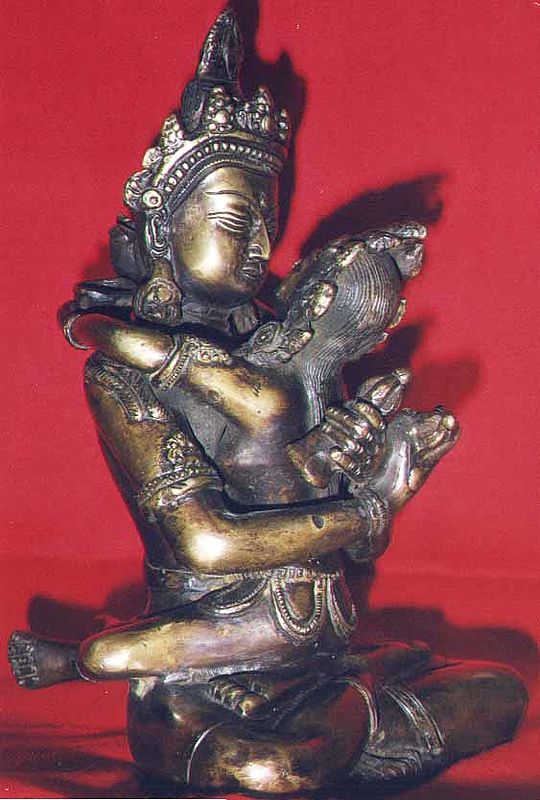 $175.00
Notify me when this item is available
Save to Wishlist Send as E-card Share by Email
Notwithstanding the fact that the Buddha essence is non-polar, Buddhist iconographers use sexual polarity to symbolize the twin concepts of insight and compassion. All goddesses are symbols of insight and the gods represent compassion. The union of compassion and insight symbolizes the non-polarized state of bodhicitta, or the mind of enlightenment, which is represented visually by showing two deities engaged in sexual union. Tibetans characterize such images as yab-yum, which literally means father-mother; in Sanskrit the expression is yuganaddha (pair united). This sexual metaphor is also used to denote the highest stage of yoga in which there is no polarity, no discrimination, and the truth is indivisible as the vajra itself. It may be added parenthetically that while such images, whether statues or paintings, are today much sought after by collectors and boldly displayed in museums, in Tibet they were always meant to be seen only by the initiated. The rites associated with these images were also arcane and not for public consumption.

The couples of Buddhist iconography celebrate this deep harmony of the sexes. The purpose of this dynamic was the creation of partnerships devoted to the realization of the ultimate truth.

The father-mother union image is not an example of erotic art, but is a manifestation of the Buddha's highest spiritual essence. More than metaphorical, to the devout this image is concrete evidence of the existence of great spiritual attainment. The female (mother) represents transcendent wisdom: the direct awareness of reality as the Buddha experienced it and taught it. The male (father), represents compassion for all beings, which is the natural expression of such wisdom. Their union, although exquisitely blissful, is ultimately undertaken out of compassion for the world. This sacred communion of the male and female elements generates waves of bliss and harmony that turn the world into a Mandala (container of essence) and showers forth a rain of nectar that satisfies the spiritual hunger in the hearts of living beings everywhere. Modern depth psychology has recognized such images to represent the deepest archetypes of the unconscious, integrating the powerful instinctual energies of life into a consciously sublimated and exalted state.